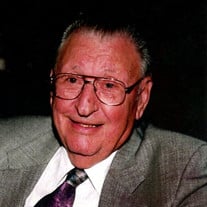 Aaron Braeman (100 years) of Overland Park, Kansas died on August 17, 2014 at Village Shalom, Overland Park, KS. Funeral services will be held at 1:30pm Wednesday, August 20, 2014, at The Louis Memorial Chapel, with burial at Rose Hill Cemetery. The family suggests contributions can be made to the Jewish War Veterans Memorial Museum at the Kansas City Jewish Community Center or the Braeman Family Educational Fund at The Temple, Congregation B’nai Jehudah. Mr. Braeman was born in Minneapolis, MN on May 29, 1914, son of Mary and Ezedor Braeman. The family lived on a farm near Rhame, North Dakota until the age of nine when they moved to Minneapolis, MN. After serving in the Army Air Force during World War II, he moved with his wife Sophie Pincus Braeman to Kansas City, MO. Over the 60 years that he lived in Kansas City, he was a past member of Beth Shalom and Kehilath Israel, and was a current member of the Temple, Congregation B’nai Jehudah for over two decades. Mr. Braeman was a true entrepreneur and over his business career, he manufactured women’s clothing, owned and operated several local liquor /deli stores, built homes heated by solar panels, and created and manufactured Zadies Seasonings, which is still sold in grocery stores and delis throughout the Kansas City area. He was one of the organizers of the Missouri Retail Liquor Association, and was past present of that organization. An avid patriot and grateful for the opportunities afforded his family in the United States, and mindful of the personal commitments by men and women serving in the Armed Services, he was active in the Jewish War Veterans Association where he served as past present and state commander. He was a co-founder of the Jewish War Veterans Memorial Museum located at the Jewish Community Center. In celebration of his 100th birthday, the MoKan Post 605 honored him with a special award, “Veteran of the Year.” Mr. Braeman was preceded in death by his wife of 46 years, Sophie Pincus Braeman in 1990 and his wife of 10 years, Hope Copeland Braeman in 2001. He is survived by his sister Ruth Braeman Marell Goldberg of Minneapolis, MN and his brother Samuel Braeman of San Jose, CA. As well, he is survived by his daughters Eileen Braeman of Long Beach, CA. and Roslyn Braeman Payne of San Francisco, CA, his grandchildren, and many cousins, nieces and nephews.

The family of Aaron Braeman created this Life Tributes page to make it easy to share your memories.