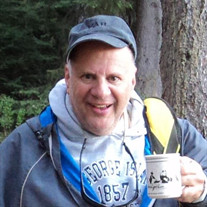 Aaron Pfefer, 57 of Kansas City, MO died Friday December 11, 2015 after a long battle with cancer. Funeral services will be held at 1:00pm Sunday, December 13, 2015 at Louis Memorial Chapel, 6830 Troost, Kansas City, MO 64131. Kindly omit flowers, the family suggests contributions to Kehilath Israel Kiddush Fund or American Cancer Society. Aaron was born September 3, 1958 to David and Lillian Pfefer in Kansas City, MO. He attended Hyman Brand Hebrew Academy and graduated from Center High School in 1977. After graduating high school, he spent a year in Israel, a short time in New York and then returned to Kansas City. In 1981, he founded Advance Detection Security, Inc. and provided security to local and regional businesses and residential areas. He sold his company in 2013. He was an active member at Kehilath Israel Synagogue, most recently receiving the honor of Chatan Bereshit for his many contributions to the Synagogue, especially taking charge Kiddushim served after services. Aaron was a “renaissance man” with many interests and hobbies including bee keeping, cooking, riding his Harley and fishing. He had a wide circle of friends and it is said that he never met a stranger. Aaron was preceded in death by his parents, David and Lillian Pfefer. He is survived by his children, Amanda Wetherill, Alex Pfefer, Jesse Pfefer, all of Palm Bay, FL; his brothers, Joseph (Debby) Pfefer, Daniel (Elizabeth Kadar) Pfefer, Eli Pfefer. He is also survived by his fiancée, Debbie Cohen Entine and nephew, David Pfefer.

The family of AARON PFEFER created this Life Tributes page to make it easy to share your memories.