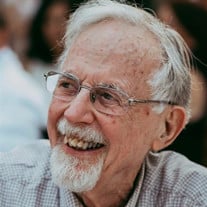 Abe E. Braverman, MD, 91, of Overland Park, KS, passed away Sunday, December 30, 2018 at Menorah Medical Center. Graveside services will be at 2:00pm Wednesday, January 2, 2019 at Beth Hamedrosh Hagodol Cemetery, St. Louis, MO and a memorial service will be at 11:00am Friday, January 4, 2019 at The Louis Memorial Chapel, 6830 Troost Avenue, Kansas City, MO. In lieu of flowers, the family requests contributions to a charity of one’s choice. Dr. Braverman was born February 9, 1927 in New York, NY, grew up in St. Louis, MO and after his military service, he moved to Kansas City. He was a graduate of Washington University, St. Louis, where he received his undergraduate and medical degrees. Dr. Braverman was in the Air Force Medical Corps, 1956-1958, and received the Air Force Commendation Medal. Dr. Braverman was in private practice in the Kansas City area from 1958-1994 and was a founding member of the Kansas City Medical Group. After retiring from private practice he was active in medical foundations and charitable organizations. He was Chairman of the Department of Medicine, President and Board Member of the Menorah Medical Center. Dr. Braverman was also President of the American Diabetes Association and served on many boards and committees for, among others, the American Stroke Society. He was a past Vice-President of the Temple, Congregation B’nai Jehudah where he was also a longtime board member. Dr. Braverman enjoyed the arts and dedicated his life to the medical field. He was preceded in death by his parents, Max and Rose (Chervitz) Braverman, his wife, Myrna Braverman, and his brother, Bill Braverman. Dr. Braverman is survived by his daughters and sons-in-law: Carolyn Braverman (Joe Goldwasser) and Mimi S. Braverman (Brian Thompson); and his granddaughter: Hannah Dolginoff.

The family of Abe E. Braverman M.D. created this Life Tributes page to make it easy to share your memories.