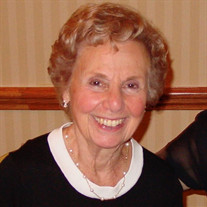 Adeline L. Trempy, 96, of Overland Park, Kansas, passed away peacefully on Saturday, Dec. 19, 2020. Adeline was born Jan. 16, 1924 in Kansas City, MO, the daughter of Hyman and Dora Levey Shultz and the sister of Joseph, Robert and David Shultz. She and her family lived on Benton Blvd., and she attended Sanford B. Ladd Elementary School, Central Junior High School and Central Senior High School. She pursued higher education at Kansas City Junior College and Universal Business Institute to seek a career in business. Adeline gained experience in several jobs leading to a career in business, including working part time for her cousins, David Dolginow, in his jewelry store and Arthur Kusnetzky in his shoe store, where both taught her skills needed to be successful in the retail industry. She started her own business, Stars of Tomorrow, with six accordion studios throughout the Kansas City metropolitan area. After selling her business she embarked on another career direction, first employed by Marlen Research Corporation until age 70 and then by Carpenter Insurance Company until age 88. In addition to a full-time job, she worked part time for 42 years at the Jones Store (later renamed to Macys) and volunteered for many years for Hallmark’s Kaleidoscope Program for children. In recognition of her many years of service to others, Adeline was honored with the 2009 President’s Volunteer Service Award. Her greatest passion in life was her family, as she was the glue that held all together. She is survived by her devoted children, son, Gregory Trempy, and his wife Debi Trempy of Overland Park, Kansas, and daughter, Janine Trempy of Corvallis, Oregon, and her three grandchildren, Blake Trempy (Overland Park, Kansas), Dayna Trempy (Overland Park, Kansas) and Kieley Trempy (Eugene, Oregon), step-grandson James Newell and his wife Ashley (their children, Cash, Carly, and Camryn) (Lee’s Summit, Missouri), her brothers, Joseph Shultz (Bellevue, Washington) and Robert Shultz (Urbandale, Iowa) and many nieces, nephews, cousins and friends. She is preceded in death by her beloved and devoted husband, Edward J. Trempy, her parents and one brother, David. Adeline was a member of Kehilath Israel Synagogue. The family requests no flowers and suggests contributions to Kehilath Israel General or Benevolent Funds or to the American Stroke Foundation. Services will be live streamed 12:30pm on Tuesday, Dec. 22, 2020 via zoom. As she said to many, she did it her way with no regrets, living life to the fullest, and she wants her children, grandchildren, extended family and friends to remember that she loves them always and forever.

The family of Adeline Trempy created this Life Tributes page to make it easy to share your memories.