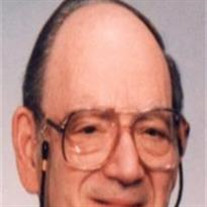 Adolph Klugman, 87, of Kansas City, MO, passed away Monday, April 18, 2011. Graveside services will be 10:30am Thursday, April 21, at Kehilath Israel Blue Ridge Cemetery. Kindly omit flowers; The family suggests contributions to the American Kidney Fund, Jewish Family Services, or to the National Federation of the Blind. The facts of Adolph’s life don’t begin to do him justice, but here they are. Adolph was born in Kansas City, and became a member of The Greatest Generation. As an Army Engineer, he paved the way for peace in the Pacific during World War II. Following the War, he married Rose Altman, with whom he had two children and 64 years of unrelenting happiness. His intellectual curiosity drove him to explore: he was active in the Kansas City Astronomy Club and built many telescopes from scratch; he was a photographer who reveled in finding something visually exciting to share with others; he loved to fly, even though his flights were first confined to the war and later to computer simulations. But his great passion, other than his family was sculpting. Self-taught, he rose to prominence as a sculptor with his work on display in synagogues, galleries, homes, and even diplomatic venues around the world. Those are the facts. But the measure of a life is the impact it has. Adolph was a heroic character in many life stories. He sheltered young friends when they needed someplace safe to stay until they could go home. He unselfishly helped friends and neighbors with whatever project they had that his skill and talent could make better. He sacrificed many of his own ambitions to make sure that his family was always cared for. To call him a hero comes closer to understanding his impact. He is survived by his wife of 64 years, Rose Klugman, of the home; son: Mark Klugman, Kansas city; and daughter: Debbie Klugman, Boise, ID.

The family of Adolph Klugman created this Life Tributes page to make it easy to share your memories.