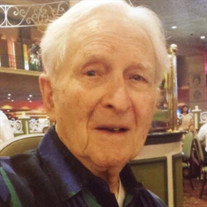 We sadly announce the death of our beloved husband, father and grandfather, Alan Steinzeig. To know Alan was to love him. Alan was born on June 2, 1921 to Dorothy and Jacob Steinzeig in Kansas City, MO. He attended Troost Elementary School... View Obituary & Service Information

The family of ALAN STEINZEIG created this Life Tributes page to make it easy to share your memories.

We sadly announce the death of our beloved husband, father and...