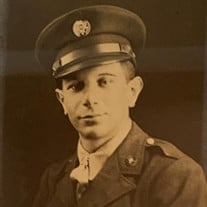 Albert Bamberger, age 98, passed away on December 17, 2019 after a brief illness at St. Joseph Medical Center, Kansas City, MO. Born in Wiesenfeld, Germany, Albert immigrated to the United States at the age of 17 in the weeks before Kristallnacht in the fall of 1938. Despite his diligent efforts, he was unable to help his parents and brother Arthur avoid being deported and killed in the Holocaust in the spring of 1942. During World War II, Albert served with pride in the US Army Air Corps in the rank of sergeant as a crew chief of a team of aircraft mechanics in Panama. On his return, he met and married Ida Bergmann, also a German emigrant, and they made their home in the Kansas City area. Albert had a successful business career as co-owner of the Art Meat Co. at 12th and Troost. In retirement, he remained engaged in business for more than 20 years for Block Real Estate. Having lost his immediate family in the Holocaust, the focus of his life was his beloved wife, for whom he cared during her fifty-year struggle with multiple sclerosis. He was predeceased by his parents, David and Jette; brother, Arthur Bamberger; wife, Ida Bamberger and his granddaughter Emily Bamberger. He leaves behind his son, Dr. David Bamberger and wife Elizabeth and their daughter Elissa; his daughter, Joyce Bamberger and husband Dan Hensley, and their children and spouses, Rosa Hensley and Dr. Sheridan Morgan, and Max Hensley and Ashley Rousson, and great grandson Arthur Hensley. We will miss him dearly. Funeral services will be held at Mt. Carmel Cemetery on December 19th at 2:30 PM. The family requests that anyone who so desires make a donation to their favorite charity in his memory.

Albert Bamberger, age 98, passed away on December 17, 2019 after a brief illness at St. Joseph Medical Center, Kansas City, MO. Born in Wiesenfeld, Germany, Albert immigrated to the United States at the age of 17 in the weeks before Kristallnacht... View Obituary & Service Information

The family of Albert Bamberger created this Life Tributes page to make it easy to share your memories.