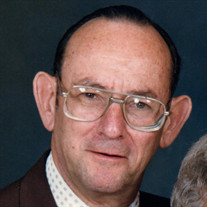 Albert Krashin, beloved husband, father, grandfather and great grandfather died on January 19th, 2015 in Needham, Massachusetts at age 95. Graveside services will be at 11:00am Friday, January 23, at Kehilath Israel Blue Ridge Cemetery. He was preceded in death by his loving wife of 73 years, Helen Krashin, who passed away last January. Albert was born on January 24, 1919 in Kansas City, Missouri and moved to Overland Park, Kansas in 1974. Helen and Albert moved to Framingham, Massachusetts 16 years ago to be close to their family. He graduated from Paseo High School class of 1937 and served in the US Army during WWII, worked for Manor Bakery, The US Postal Service and not one to sit back for very long, he worked part time at Valley View Bank for several years after retiring from the Postal Service. Helen and Albert were lifelong members of Kehilath Israel Synagogue before moving to Massachusetts. Albert enjoyed time spent golfing, he was a member of the Masonic Lodge, member of the Shriners, he was a Scout Master for Boy Scout Troop 53 at K.I. and a long distance walker. Albert is survived by his son and daughter-in-law, Marshall and Karen Krashin of Framingham, Massachusetts. He is also survived by his grandchildren, Marla and John McNulty and Stephen and Dana Krashin and his great grandchildren, Lillian Elizabeth, John Russell and Jay Thomas McNulty. Albert was devoted to his entire family and they in turn cherished and respected him greatly. He will be missed. In lieu of flowers, the family would be honored to have memorial donations be made in his name to the American Cancer Society or Kehilath Israel Synagogue.

The family of Albert Krashin created this Life Tributes page to make it easy to share your memories.