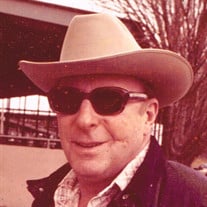 Alfred Neuberger, 92, of Overland Park, Kansas, passed away on November 7, 2016, from a diseased and broken heart, since the loss of his much beloved Freda in April 2016. Born in Freiburg, Germany, Alfred immigrated to the United States in 1937 and made his way to Kansas City to join family in the livestock business. Alfred was a self-made man. In 1964 he started his own firm at the Kansas City Stockyards, in which he remained active with his son, Alan, until near the end of his days. He was a mentor to many, respected business associate and fixture in the cattle business. Alfred was the last president of the Livestock Traders Exchange in Kansas City. Alfred had a passion for business, only to be rivaled by his passion for his family – his Freda, wife of 69 years, their loving and devoted children, Alan Neuberger (Diane), Nancy Neuberger, Linda Neuberger (Elizabeth), and precious grandchildren, Emily and Jacob Neuberger -- whose love for Alfred was returned in spades. Alfred is survived by a sister, Ruth Heller, sisters in-law, Joan Stein (Leo) and Regina Dollman; and nieces and nephews. Alfred was a brilliant thinker and decision maker; an indomitable spirit, a man of integrity, honor and dignity. He was an inspiration to those who had the good fortune of knowing him. His life was a blessing and the world a better place for having had Alfred in it. He will be profoundly and forever missed. The family would like to thank Aster Tezera, who became part of the family in caring for Alfred and Freda, and the many angels at Village Shalom and Kansas City Hospice & Palliative Care who cared for Alfred with loving kindness. A private funeral service will be held at Rose Hill Cemetery.

Alfred Neuberger, 92, of Overland Park, Kansas, passed away on November 7, 2016, from a diseased and broken heart, since the loss of his much beloved Freda in April 2016. Born in Freiburg, Germany, Alfred immigrated to the United States in... View Obituary & Service Information

The family of ALFRED NEUBERGER created this Life Tributes page to make it easy to share your memories.

Alfred Neuberger, 92, of Overland Park, Kansas, passed away on...