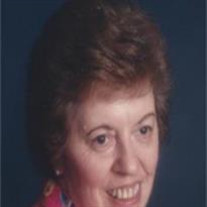 Alice Rae Hammer of Overland Park, who recently celebrated her 90th birthday, passed away on Thursday, February 21, 2013 at Menorah Medical Center. Funeral services will be held at 1:30 pm Sunday, February 24 at The Louis Memorial Chapel, followed by burial at Mt. Carmel Cemetery. In lieu of flowers, the family suggests contributions to The Temple, Congregation B’nai Jehudah or the charity of your choice. Alice was born in Kansas City, Kansas on January 15, 1923, the youngest child of Jacob and Sarah Poizner. She attended Paseo High School and the Kansas City Business College. She started her career at Parkview Drug and then worked in the accounting departments of various companies, including Sutherland Lumber, Kroger, Amoco, Interstate Brands, and finally retired from Payless Cashways. Alice then did volunteer work at St. Joseph Health Center for a number of years. She was a Life Member of Hadassah, a former member of Beth Shalom Synagogue, and a devoted member of The Temple, Congregation B’nai Jehudah. She enjoyed spending time with her family, playing Rummikub, and collecting anything related to butterflies. Alice was preceded in death by her husband, Morris Hammer, with whom she had a wonderful marriage of 29 years. She was also preceded in death by her seven brothers and sisters, Ben, Joseph, Michael, Lillian (McPherson), Erwin, Rose (Spitcaufsky), and Toby (Levin). She is survived by her son and daughter-in-law, Steve and Linda Hammer of Overland Park, her daughter and son-in-law, Cathy and Elliott Cardozo of Kansas City, her grandchildren, Michelle Hammer of Washington, D.C., and Joseph Hammer of Lawrence, Kansas, her sister-in-law Sara Lerner of Albuquerque, NM, and many nieces and nephews. The family would like to express our thanks to the staff at Freedom Pointe, Town Village, and Menorah Medical Center.

The family of Alice Rae Hammer created this Life Tributes page to make it easy to share your memories.

Alice Rae Hammer of Overland Park, who recently celebrated her...