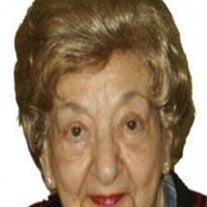 Alla “Lucy” Rafsky Ruben, 92, of West Bloomfield, MI, passed away Sunday, April 19th in Michigan. Graveside services will be held at noon Thursday, April 23, at Mount Carmel Cemetery. The family suggests contributions to Hadassah or a charity of one’s choice. Mrs. Ruben was born in Irkutsk, Russia and immigrated to Kansas City via China in 1937. She lived in Kansas City until 1987. While in Kansas City, she was an active member of BIAV, Beth Shalom and Kehilath Israel, where she was past president of the Sisterhood. Mrs. Ruben was active in many Jewish organizations. She was a life member of Hadassah, past president of Mizrachi Women’s Organization and active in Brandeis University Women’s Committee. Mrs. Ruben was a loving wife, mother, grandmother and great grandmother who always made family her most important priority during her lifetime. She was responsible for helping many members of her family immigrate to the United States. She was preceded in death by her parents, Jacob and Bella Sarno and her husbands Arthur Ritzler, Al Rafsky, William Clayman and Jack Ruben, her brother Isaac Sarno, her sister, Riva Radvinsky, her son, Louis Rafsky and step-son Bernard Ruben. Mrs. Ruben is survived by her sons and daughters-in-law, Errol and Marlene Rafsky of Colorado, Carol Rafsky of St. Louis, Mark Rafsky of Michigan, Steve and Greta Rafsky of Massachusetts; her step daughters Sandra Gasser and husband William Gasser, Phyllis Kogan and husband Ronald Kogan and her step daughter in-law Charlotte Ruben. She is also survived by seventeen grandchildren, twenty-two great grandchildren.

The family of Alla "Lucy" Rafsky Ruben created this Life Tributes page to make it easy to share your memories.