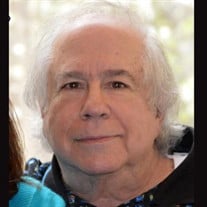 Allen D. Agron, of Leawood, Kansas died Tuesday, November 3 at Menorah Medical Center with his wife at his side. Private funeral services will be held on Friday, November 6, with burial at Rose Hill Cemetery. For zoom information please contact the funeral home. In lieu of flowers, the family requests donations to Allen Agron Ramah Scholarship Endowment Fund (camp for kids), c/o Jewish Community Foundation of Greater Kansas City, 5801 W. 115th Street, Suite 104, Overland Park, KS 66211; or Kansas City PBS, (125 E. 31st Street, Kansas City, MO 64108); or a charity of your choice. A native of Kansas City, Missouri, Allen was a 1960 graduate of Southwest High School and received a B.S. degree in business in 1964 from the University of Colorado at Boulder, with a major in finance and economics. He served in the U.S. Air Force Reserves from 1964 to 1970. Allen was initially a mortgage banker, active in real estate from 1965 through 2010, and associated with the City Bond and Mortgage Company and Herbert V. Jones & Company. During that time, he completed all four levels of real estate appraisal certifications at the University of San Francisco and the University of Colorado. A licensed real estate broker in Missouri and Kansas, he was formerly associated with the Byron Shutz Company, the Yarco Company, and Income Property Services, Inc., where he was involved with the design, development, management, and enhancement of multi-family communities. He cared greatly about the quality of space and design for the enjoyment of the residents of his communities, and he valued relationships with vendors, staff, and residents. For over 20 years, he served as president of Allen D. Agron, Inc., with principal emphasis on management of multi-family housing. Allen was a past two-term president of the Beth Horon Shalom Lodge of B’nai B’rith. He was a member of The Temple, Congregation B’nai Jehudah, the Alumni Association of the University of Colorado, the KC Symphony Society, the KCPT Producer’s Society, the Nelson-Atkins Museum of Art, and the Museum of Glass in Seattle. Nature always held a special spiritual quality for Allen, whether under the waves or on a mountaintop. He blended a love of both nature and adventure through years of extensive travel, which included scuba diving, reef exploration, snorkeling, and art and artifact collecting in more than 40 countries. He enjoyed many of these adventures with his beloved wife, Janet, and they shared interests in entertaining friends, raising funds for charitable causes, and enjoying fine food. He was preceded in death by his parents, Irvin and Frances Agron, and his first wife, Elizabeth Agron. Survivors include his wife, Janet Provines Agron, of the home; his sister and brother-in-law, Marilyn Salomon and David Renner; a nephew, Stuart Salomon; and two stepchildren, Russell Rubin of Houston, Texas, and Stephanie Pascal of Oakland, California.

Allen D. Agron, of Leawood, Kansas died Tuesday, November 3 at Menorah Medical Center with his wife at his side. Private funeral services will be held on Friday, November 6, with burial at Rose Hill Cemetery. For zoom information please contact... View Obituary & Service Information

The family of Allen D. Agron created this Life Tributes page to make it easy to share your memories.