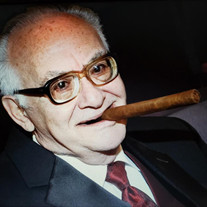 Our father, Allen Levine, passed away peacefully on September 29 at Kansas City Hospice House. He was born in Kansas City, Missouri on November 28, 1930 to Manuel and Sylvia Levine as the second of four children. He attended Paseo High School where he played basketball, loved Spanish class, and met the love of his life, Donna Aaron. He and Donna shared 47 years of marriage, complete with extreme devotion for one another. Allen took care of Donna’s every wish, including grocery shopping and cooking. When she became ill in 1992, Allen cared for her dutifully until she passed away in 1998. Over the years, he was involved in B'nai Brith and enjoyed the ROMEO's weekly gatherings. He was a member of Kehilath Israel Synagogue. He loved to play golf, go bowling, play in his weekly poker and pitch nights, and, of course, watch every Chiefs and Royals game for over 40 years. He was often found with his characteristic cigar hanging out of his mouth, even to the end. Allen’s father died at an early age and he had to be the “breadwinner” for his mom and three sibling for many years while growing up. He was a furrier and then a successful life and health insurance salesman. As the top salesman for National Health Insurance Agency several years, he traveled to Europe and throughout the United States as a company representative. He was even invited to the White House to meet with President Nixon as a consultant on Medicare/insurance related issues. Allen and Donna had three children, Rochelle, Mitchell, and Stuart. He attended all of their events, drove them wherever they needed to go, and never missed an opportunity to take them out to dinner. The kids would ride around with him after school while he made his insurance calls and then out to dinner the family would go. Some of his favorite spots were Allen’s Drive In, Arthur Bryants, Blenders, Wishbone, and Winsteads. Allen is survived by three children, Rochelle Kanter (Ed), Mitch Levine (Mitch Bronson), and Stuart A. Levine and his dog, Harvey. All of his grandchildren and great grandchildren called him “Pa”. He adored and shined his love on his grandchildren: Jessica Kalender-Rich (Adam Rich), Jennifer Fletcher (Lowell), Shane Kanter (Julia), Jillian Maynard (Bryan), Sean Levine, and Amanda Harper (Matt). He also was blessed with 11 great-grandchildren who loved to climb up on his knee while he sat in his recliner chair. Their names are Yonatan, Eliezer, Shua and Devora Hannah Rich, Kaitlyn and Brady Coulis, Hadley and Easton Harper, Dov and Elon Fletcher, and Mayer Kanter who shared our dad’s Hebrew name. He is survived by his sister, Linda Hyken, and his sister-in-law, Loretta Levine. He is also survived by many nieces and nephews, and cousins. He was preceded in death by his parents Manuel and Sylvia Levine, brothers Jerry Levine and Harvey Levine, brother-in-law Harvey Hyken, sister-in-law Linda Levine, and his beloved wife Donna Levine. The family wants to extend a special thank you to Dr. Don Cohen for always picking up the phone when Dad called and always taking care of him, no matter how grumpy he was. Thank you also to his caregivers Sean (his nephew), Emma, Renika, and Robert. A special thank you to Stuart (his son) for managing the care team and helping him through many rough nights. In his memory, Big Al would want you to kick back and enjoy a cigar on his behalf. A private funeral will be held graveside at Kehilath Israel Blue Ridge Cemetery. Donations can be made to the charity of your choice.

Our father, Allen Levine, passed away peacefully on September 29 at Kansas City Hospice House. He was born in Kansas City, Missouri on November 28, 1930 to Manuel and Sylvia Levine as the second of four children. He attended Paseo High School... View Obituary & Service Information

The family of Allen Herbert Levine created this Life Tributes page to make it easy to share your memories.

Our father, Allen Levine, passed away peacefully on September...