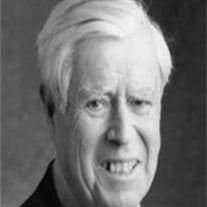 Alvin Shapiro was many things: An accomplished lawyer, an avid tennis player, an opera aficionado, a devout Jew. But more than anything he was a family man. Al rose to the top of his profession in Kansas City, his adopted home. He spent 21 years as a lawyer and partner with Stinson Mag & Fizzell, then went on to open his own firm in 1980, where he represented clients such as the Kansas City Royals, Farmland, Ford and Goodyear. But through it all, he never missed a dinner with his wife and four children. Al cherished his family and knew the importance of spending time together. Or maybe he just couldn’t bear not eating one of his beloved wife’s amazing meals. Al always took the opportunity to compliment Patti on her cooking: “You outdid yourself, old girl,” he would say. He treasured her as a best friend, a partner and a confidant. Born in Brooklyn, N.Y., in 1930, Al’s father, Sam, was a grocer. His mother, Fanny, died when he was 14 years old, so he was mostly raised by his aunts, Sylvia Breen and Shirley Resnick. Fanny introduced young Al to one of his greatest passions, opera, when he was 11, taking him to the San Carlo Opera to see Pagliacci. After she died he continued to go, mostly enjoying the spectacle from the standing room section. With his older brother Murray, Al shared a love of baseball, often playing in the schoolyard from 8:00 in the morning until 6:00 at night. The two brothers went regularly to Dodgers games, scrounging around for the 55-cent entry fee. Al hated the Yankees, but couldn’t resist the allure of Joe DiMaggio. When he moved to Kansas City, Al switched his allegiance to the Royals, holding season tickets right behind home plate for many years. He sat with his adoring children, Peter, Julia, Molly and Tony, effortlessly calling each and every pitch and sneaking sips from a smuggled-in flask. After graduating high school, Al worked as a Western Union bike delivery boy. Next to the office was a horse betting establishment, which is where he became interested in racing. “I just liked the milieu,” said Al. “And I lost a little money.” His first time out of New York was when he decided to attend college at the University of Missouri, Columbia, where he studied journalism and developed a love of English literature, particularly Charles Dickens. There he also developed another of his great loves: bourbon. “In my junior year—I can remember it like yesterday—there was a bar on East 8th Street in Columbia,” said Al. “I had a bourbon and soda, and it was the most delicious thing I ever had. I thought, ‘Where has this been all my life?’” After graduating college, Al joined the Navy in 1951 and served during the Korean War. While he told his children all he did was swab the decks and chip paint, the truth was that he worked as a journalist, ran a photo lab, acted as a French interpreter, and sailed to Europe as a staff member for a four-star admiral. Upon discharge, Al went to Yale Law School with the help of the GI bill and a scholarship. He would have graduated No. 1 in his class had he not come down with a case of mono during the final month of school, which caused him to graduate No. 2 instead. He was later recruited by Stinson Mag, “The only big firm in Kansas City that would hire a Jew,” he explained. There, Al was immediately entrusted with some of the firm’s biggest cases. He was known as “the common sense guy.” So after all the arguing and debating, inevitably the room full of lawyers would turn to him and ask: “OK, Al, what do you say?” According to Alvin, “It was just a question of getting things done.” A lot happened during Al Shapiro’s first 30 years, but without a doubt, May 2, 1959, was the most important day of his life. That evening he went to dinner at his colleague Mort Rosenberg’s home, where he met Renee Rosenberg’s cousin, Patti Swaden. Patti had come down to Kansas City with her mother, Jesse, from their home in St. Paul, Minn. She had a boyfriend and no interest in meeting someone new. But Al was so smitten, he simply wouldn’t take “No” for an answer. After dinner he whisked her away for a late night concert in Loose Park. The next day he took her to La Louisiane on Main. He drove her to the airport when it was time to go, and promised he would take a train to visit her the next weekend. Six months later, they were married on November 8, 1959. “I never had anyone pursue me the way Pop did,” said Patti. “Without any reservation, without any fears of being rebuffed. Just completely coming out with feelings that I could tell were genuine.” Alvin Shapiro died of Parkinson’s disease on July 24, 2012. He was at home until the end, surrounded by his Opera News, Blood Horse and New Yorker magazines; his attentive caregivers; his wonderful friends; and his loving wife, children and grandchildren. Alvin is survived by Patti, his wife of 52 years; his children: Peter Shapiro (Amy); Julia Shapiro (Tom Linafelt); Molly Shapiro; Tony Shapiro (Kelly); and nine grandchildren. Funeral services will take place at The Louis Memorial Chapel, 6830 Troost Avenue, Kansas City, Missouri, on Thursday, July 26, at 1:00 pm. In lieu of flowers, the family suggests contributions to the Hyman Brand Hebrew Academy.

Alvin Shapiro was many things: An accomplished lawyer, an avid tennis player, an opera aficionado, a devout Jew. But more than anything he was a family man. Al rose to the top of his profession in Kansas City, his adopted home. He spent 21 years... View Obituary & Service Information

The family of Alvin D. Shapiro created this Life Tributes page to make it easy to share your memories.

Alvin Shapiro was many things: An accomplished lawyer, an avid...