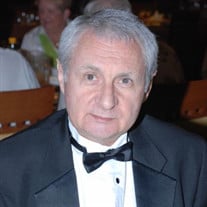 Anatoly Gregory Rubchinsky, 85, of Overland Park, died Monday, January 25, 2022. Funeral services will be held at 1:00 p.m. Sunday, January 30 at The Louis Memorial Chapel, 6830 Troost Ave., Kansas City, MO 64131. Masks will be required. Burial to follow in Rose Hill Cemetery. To view the services by zoom, please email [email protected] Flowers may be sent to the chapel. Born to Clara (Chiya Yiska Lubovna Katz) and Gregory "Gresha" Rubchinsky on November 4, 1936, in Kharkiv, Ukraine, during the Soviet Union, Anatoly's birth coincided with extreme political repression and severe famine. At the age of nine (9), Anatoly and his family moved to the capital city of Kyiv. As a young adult, he earned his degree as a telephone communication specialist. After finishing his studies, at 17 years old, Anatoly had to serve compulsory service in the Soviet Military and, as a private, was sent to Kazakh in the now known "Virgin Lands Campaign," where he developed pneumonia. After recuperating, he was reassigned as a communication specialist for the entire Navy Black Fleet command center station in the Sevastopol Naval Base in the Crimean region. Anatoly was assigned to serve in a Soviet-era submarine. Anatoly was honorably discharged in 1959. He then moved to Kyiv, where he met 22-year-old Tatyana Tolpina at a neighborhood party in Kyiv, Ukraine; it was love at first sight, and he quickly married his beloved wife of 62 years in 1960. In 1961 Anatoly and Tatyana gave birth to their eldest son Igor. Anatoly continued his education in Kyiv, where he earned a Master's Degree in Electromechanical Engineering. Anatoly worked for the Soviet Era Engineering Bureau on various assignments during this time. In 1974 Anatoly welcomed his second son Konstantin. At the age of 43, in 1979, he moved his multi-generation family from the Soviet Union and was embraced in the United States as refugees. Anatoly immigrated to Kansas City with his wife, two sons, father & mother-in-law, and 93-year-old grandmother-in-law. As the head of the household, with little to no English, Anatoly walked the streets of Kansas City, specifically Troost street, where the family lived, going door-to-door, inquiring about work. Finally, upon learning of his profession, he met a man who referred him to Mobay Chemical Corp., where he worked for a few years—finally procuring employment with the Pritchard Corporation (Black & Veatch). During his tenure, he earned his Professional Engineering licensure self-studying. Anatoly retired at the age of 65. In 1985 Anatoly and the entire family that immigrated from the Soviet Union achieved the American Dream and became United States Citizens. During this time and after, Anatoly passed on what he learned and helped many other Jewish Refugees adapt to American life. Anatoly passed a day after his 62nd wedding anniversary. His loving wife of 62 years survives him, in addition, his sons and daughters-in-law, Igor Rubchinsky, and his wife, Claudia Chavez (note his wife has a different last name) of Chicago, Illinois. Konstantin and Lisa Rubchinsky, of New York City, NY. Grandchildren Gunner Gosling and Naomi Sky Rubchinsky, his loving nieces Freda and Lara, their husbands Eduard and Boris, their loving children, and his half-brother Semyon. Anatoly is preceded in death by his sister Fera.

The family of Anatoly Rubchinsky created this Life Tributes page to make it easy to share your memories.