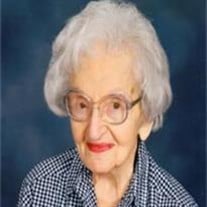 Anita B. Berkowitz, 104, passed away on Friday, March 23, 2012 at Village Shalom. Graveside services will be held at noon on Tuesday, March 28, 2012 at Adath Joseph Cemetery in St. Joseph, MO. A memorial service will be held on Wednesday, March 29th at 1:00 pm at The Temple, Congregation B’nai Jehudah, followed by a reception. Kindly omit flowers. The family suggests contributions to The Temple, Congregation B’nai Jehudah Rabbis’ Discretionary Fund and/or Brandeis University Library Fund. Anita was born Thursday, Sept. 12, 1907, to Charles Coleman and Ruth Esther Brady of St Joseph, MO. She attended the University of Illinois-Champaign where she received her B.A. and M.A. degrees. She met Abraham Berkowitz at Hillel’s first house at the university and they were married on March 29, 1931. Abraham preceded Anita in death in 1961. Abraham and Anita lived in Mattoon, IL where they raised their two sons. and Anita gave her energies and volunteered as president of the Central Illinois Council of B'nai B'rith Women and helped establish the Mattoon Chapter. She was on the board of the Anti-Defamation League of B'nai B'rith, Regional Board member of American Association of University Women and actively engaged in county and statewide Democratic Women's Clubs. She and Abraham moved to Kansas City, MO. in 1958. Anita taught at Southwest High in the Kansas City Public School District for over twenty years until she retired. A generous volunteer, Anita tutored in her home for thirteen years, teaching English to Vietnamese, Spanish and Russian immigrants. Anita was an early worldwide traveler and photographer having visiting over sixty countries on every continent except Antarctica. She felt that through her travels, the knowledge and experiences she gained were invaluable to her and her students. She volunteered at The Nelson-Atkins Art Gallery, Brandeis University Annual Book Sale, The Temple, Congregation B'nai Jehudah and its Sisterhood. Anita was a life member of Brandeis University National Women's Committee and a benefactor of Brandeis Libraries, a life and honorary member of the American Association of University Women, National Council of Jewish Women, and Hadassah, and a member of Friends of the Library of UMKC, Truman Medical Auxiliary, Hyman Brand Hebrew Academy, The Nelson-Atkins Museum, Nelson Museum Friends of Art and Heart of America Shakespeare Festival. Anita was a superb cook and receiver of culinary prizes in national publications. Survivors include two sons and a daughter-in-law, Nathaniel C. Berkowitz and wife Myra of Sausalito, CA and Edward H. Berkowitz, Ph.D, of Palo Alto, CA, her sister, Gertrude B. Kaufman of Silver Spring, MD, four grandchildren: Ethan Berkowitz of Anchorage, AK, Zachary Berkowitz of San Francisco, Ruth Berkowitz of Hood River, OR, Michael Berkowitz of Portland, ME, and seven great-grandchildren.

Anita B. Berkowitz, 104, passed away on Friday, March 23, 2012 at Village Shalom. Graveside services will be held at noon on Tuesday, March 28, 2012 at Adath Joseph Cemetery in St. Joseph, MO. A memorial service will be held on Wednesday, March... View Obituary & Service Information

The family of Anita Brady Berkowitz created this Life Tributes page to make it easy to share your memories.