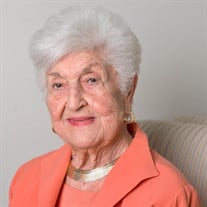 Ann Federman, neé Chana Warshawski, loving wife and mother, good friend to many, and a Holocaust survivor, died on Febuary 8, 2021 at the age of 95. She was born in Bedzin, Poland on August 16, 1925 to Avram and Miriam Warshawski, the tenth of eleven children. Ann’s early life was difficult: Her mother died before Ann was ten years old, her family was not well off, and anti-Semitism was common in Bedzin. But her extended family was large and close-knit, and she had many happy memories of holidays and other special occasions filled with good food, music, and companionship. In 1939, the Nazis entered Bedzin, establishing curfews and requiring Jews to wear yellow arm bands as identification. Ann remembered watching on a Friday evening as SS soldiers locked the doors of a synagogue filled with worshippers and burned the building to the ground. Later still, she remembered the knock on the door when they came to take her brothers to work camps. In 1942, her father died, and in September of that year all Jews remaining in the town were ordered to gather in a square with their belongings. Ann and her older sister Gusti (later Wolowski) were sent on a freight train to Parschnitz, a work camp near Trutnow, in what was then Czechoslovakia. They worked there as slave laborers for a German industrialist in a mill producing thread from cotton to be used in army uniforms. Ann and Gusti were joined at the camp by their younger sister Leah, who soon became ill and, unable to work, was sent to her death. Ann and Gusti maintained a strong bond in the camp, helping each other as much as they could. Ann later said that she survived because she decided to be strong and to have faith, and because of her memories. With little to eat on a Sabbath or other holiday, she would keep her spirits up by talking with others about what life would be like that day if they were home: what they would eat, how it would taste and smell, how happy she would be when her father and brothers came home from services so they could all be together and sing around the table. She later said that in those days she dreamed of being free, of not being afraid of the knock on the door during the night, and of having her own kitchen. Ann and Gusti were liberated by the Russian army in May 1945. Not knowing whether any other members of their family had survived, they returned to Poland to look for them. Eventually, her brother Aron (later Warren) learned that they had survived and came from Germany to find them. With Aron, they made their way to the displaced persons camp at Bergen Belsen, where they found their brother Chaim Warshawski (later known as John), the only other sibling to have survived. At Bergen Belsen she met and fell in love with Chaim’s friend Isak Federman. In June 1946, Ann, Gusti, Aron and Isak immigrated to the United States and joined a small group of other survivors who came to Kansas City under the sponsorship of the Hebrew Immigrant Aid Society (HIAS). They were met at Union Station by a volunteer with Jewish Family Services, which provided apartments for them to live in and helped them find jobs, mostly within the Jewish community. Ann and Isak were married on September 22, 1946. Their wedding was hosted by the Jewish community, and Ann remembered a crowd of nearly 500 guests, most of whom she had not previously met. Afterwards, they went on a honeymoon to Denver by Greyhound bus to visit Gusti, who was hospitalized there, accompanied by Ann’s brother Aron. They returned to Kansas City in time for the Jewish High Holidays and were given a membership to Kehilath Israel Synagogue. They remained dedicated members of K.I. for the rest of their lives, through which they made a number of lifelong friends. In his history of the Kansas City Jewish community, Dr. Joe Schultz wrote of Ann and Isak that in the days and years after they arrived in Kansas City and were married, they were “in love with each other, and with life itself.” And they continued to be. Ann rejoiced in the freedom she found in the United States. She devoted her life to the traditions she had grown up with, attending services weekly, and participating in the life of the Kansas City Jewish community. She served as President of the Sisterhood of Kehilath Israel and continued to support the synagogue, Hadassah, Jewish Federation, the Midwest Center for Holocaust Education (MCHE), and a number of other organizations. She made many friends, no doubt because she was kind and thoughtful, a gracious and meticulous hostess, a quick wit, and a sure judge of character. But she especially loved her role as wife and mother. She was totally devoted to Isak, first to supporting his business and community pursuits, and later to taking care of his needs until his death in September 2016. She was a protective and doting mother, who enjoyed nothing more than cooking for her children and grandchildren and celebrating holidays and special occasions with them. She is survived by her three children Rachel Altman (Avrom), Arthur Federman (Diane), Lorie Federman, five grandchildren, and eight great-grandchildren. The family thanks the staff at Village Shalom, Patricia Vidal, and Kansas City Hospice for their care of Ann. In lieu of flowers, the family requests contributions to the Midwest Center for Holocaust Education (mchekc.org), 5801 W. 115th Street, Overland Park, Ks. 66211 or Kehilath Israel Synagogue (kisyn.org), 10501 Conser, Overland Park, Ks. 66212. Ann’s funeral will be held on Wednesday, February 10, 2021 at 2:00 pm. To participate in the funeral by Zoom, please contact [email protected] to obtain the link. Shiva services will be held by Zoom on Wednesday and Thursday evenings at 6:00 pm. To obtain the link for shiva services, please contact [email protected] for the link. There will also be a Shiva on Monday evening. Please contact Beth Shalom Synagogue for more information.

Ann Federman, neé Chana Warshawski, loving wife and mother, good friend to many, and a Holocaust survivor, died on Febuary 8, 2021 at the age of 95. She was born in Bedzin, Poland on August 16, 1925 to Avram and Miriam Warshawski, the tenth... View Obituary & Service Information

The family of Ann Federman created this Life Tributes page to make it easy to share your memories.