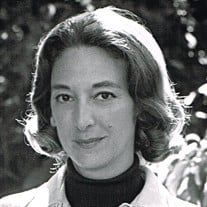 Ann Benjamin Kander passed away January 26th, at the age of 89. While her death was not exactly unexpected, it is a shock to imagine life without her heart, her courage, the love of her life-long friends, and her joyful pride in family. Although her physical health was ever more challenging the last several years, her determination to make the best of it, and her never-ceasing wish to give back more than she received, only grew. Ann was born in Kansas City in 1926, to Alfred And Dorothy Benjamin, the first of two daughters. Both Ann, and her loving sister, Trudy Ziegler, who predeceased her, were infused with the legacy of generations of public service with which the Kansas City community has come to know the Benjamin family. She was a graduate of Sunset Hill School, and a music major at Smith College. When her children had grown, she earned a masters degree in English Literature at UMKC, the better to express her belief that truth and beauty, and the gifts of their expression, are what encourage us to lead, and share, our best lives. Ann is survived by her loving and devoted husband of 67 years Edward, brother-in-law John (Albert), and three children, John (Marcia), Steve (Janet) and Susan (Warren), each of whose love and respect she earned and returned every day. Her six grandsons, Jason (Diana), James (Sharen), Sam (Shannon), Jeff (Sasha), Jacob and William and, especially, her two great-grandsons True and Oliver, will always wish they had more time with her. She also leaves dear friends and care-givers, Margaret Grayson and Estralita Albot, who enriched her later years immeasurably. Her influence and passion for excellence spread far beyond her loved ones. She exemplified a generation of full-time volunteers who contributed their time, ideas and money to life-enriching endeavors that are all too often the collateral damage of official priorities and never-ending culture wars. For decades, she helped and encouraged her fellow Kansas Citians, especially children, to discover and value the wonderful music, theater and creative arts she enjoyed and respected so much. She was, as well, a mentor to so many who wished to devote their careers to the performing arts. She was either a founder, benefactor and/or creative force behind a great many of this community’s cultural organizations, including UMKC’s Cockefair Chair, Women’s Council, and Conservatory of Music. She was, for over 50 years, a member of the National Jewish Women’s Council Study Group, from where so many of her deepest friendships grew. She created and oversaw Project Intrigue, which designed and taught music appreciation classes to Kansas City’s elementary school students to prepare them for The Kansas City Philharmonic’s Young People’s Concerts. For these and other civic endeavors, she was an early recipient of The Trudy Award, from Young Audiences, for her unique contribution to spreading the joy of music to public school children. She was also a founding force, and long-time board member, of The Coterie Children’s Theater, one of the city’s, and the nation’s, artistic treasures. On all scores, she simply lead by example, leaving a legacy of generosity, determination and respect for others that inspires all who were fortunate to know and love her every day. She enriched our lives immeasurably, making us better people than we might otherwise have been. The family suggests donations in Ann’s honor to the ALS Foundation For Life, The Coterie Theater, or a charity of choice. A Celebration of Life will be held at a later date to be announced.

Ann Benjamin Kander passed away January 26th, at the age of 89. While her death was not exactly unexpected, it is a shock to imagine life without her heart, her courage, the love of her life-long friends, and her joyful pride in family. Although... View Obituary & Service Information

The family of ANN BENJAMIN KANDER created this Life Tributes page to make it easy to share your memories.