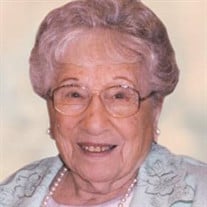 Ann Himmelstein Studna, beloved mother, grandmother and great-grandmother, passed away Tuesday, May 5, 2015 in Houston, Texas, at the age of 100 after a great long life. She was born and lived all but the last five years of her life in Kansas City, Missouri. She spent the last years of her life living in Houston, TX close to her son, Harry and wife Letty, who cared for her. Ann’s parents Alex and Mollie Kraft emigrated from Russia to Kansas City with daughters Rose and Morrine. Ann was the first born in the United States. She survived her parents, her sisters and her youngest brother Lee. She also survived her first husband, Carl Himmelstein, and her second husband, Bennie Studna. She leaves behind two sons, Marvin and Harry Himmelstein, four grandchildren, Stuart, Cathy, Cari and Abby and five great-grandchildren Mitchell, Spencer, Channing, Sennett and Sage. She was an avid Mah Jongg player she was always looking for a game. She also learned to like Bingo. She was very alert and always up on the latest national and international news and enjoyed talking about politics. Everyone loved her for her kindness, warmth, and humor. She possessed an amazing memory and was admired for her thoughtful conversations and for always remembering people’s names. Her favorite book was the English dictionary. She was appreciative of her family and friends who called long distance to check on her or attended her several birthday parties. The light of her life in recent years were her great-grandchildren that recharged her with visits during the summer and Thanksgiving and frequently sending photos and videos that her son Harry would show her on the computer. Her family would like to thank the beautiful ladies and staff at The Medallion Assisted Living in Houston, TX for the friendship and companionship they brought into Ann’s life for four years and the staff at Seven Acres Nursing Home and Vitas in the last months of her life. In addition, we would like to thank Rabbi Josh Lobel, from Congregation Beth El, for his multiple visits to comfort Ann at the Nursing home. Her loving presence will be missed by all. On May 10, 2015 at 2:30 p.m. family and friends gathered at Blue Ridge Cemetery in Kansas City, Missouri for graveside services. She was laid to rest next to her first husband Carl Himmelstein. Donations may be made to Congregation Beth El in Missouri City, Texas to Rabbi Lobel’s discretionary fund. 3900 Raoul Wallenberg Lane, Missouri City, TX 77459. http://www.betheltx.org/

Ann Himmelstein Studna, beloved mother, grandmother and great-grandmother, passed away Tuesday, May 5, 2015 in Houston, Texas, at the age of 100 after a great long life. She was born and lived all but the last five years of her life in Kansas... View Obituary & Service Information

The family of ANN HIMMELSTEIN STUDNA created this Life Tributes page to make it easy to share your memories.