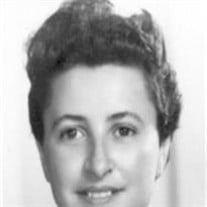 Ann F. Walters, 75, Overland Park, KS passed away Wednesday, December 16, 2009 at ManorCare of Overland Park. Funeral services were held Friday December 18 at the Louis Memorial Chapel, 6830 Troost Avenue. Burial Mt. Carmel Cemetery. The family suggests contributions to Beth Shalom Synagogue, 14200 Lamar, Overland Park, KS 66223 or food for her family. Mrs. Walters was born in Radzilow, Poland and as a child and teenager she suffered through the Holocaust. She and her immediate family survived but were separated and imprisoned in Cyprus. When she was released she immigrated to Rechovot just as Israel’s independence was proclaimed in 1948. She completed High School and became a sergeant in the Israel Defense Forces in Israel where she lived until immigrating to Chicago in 1957. In 1959 she moved to Kansas City. She and her husband owned The Walters Jewelry Company, a wholesale jewelry distribution company, for 32 years. She retired in 1991. She was a member of Beth Shalom Synagogue and its Sisterhood, life member of Hadassah, member of Brandeis University Women’s Committee, Menorah Medical Center Auxiliary, Shalom Geriatric Center Auxiliary, National Council of Jewish Women, Jewish Women International, The Hyman Brand Hebrew Academy, she was a sergeant in The Israeli Defense Forces, Mercaz and lectured as a survivor of the Holocaust at many schools for The Midwest Center for Holocaust Education. The Book “ We from Jedwabne” by Anna Bikont, which chronicled her family’s experience, featured her on the cover as the very last witness of the massacre in the town. The website about Radzilow (www.radzilow.com) features the history, news articles, testimony and photos of Ann (Chana) and her family. She was a truly beautiful and kind woman and a devoted loving mother and grandmother. Mrs. Walters was preceded in death by her parents: Israel and Chaya Finkelstein; siblings: Menachem Finkelstein, Yaffa Finkelstein Rothstein and Shalom Finkelstein. She is survived by daughter: Dr. Giselle Wildman, Blue Springs, MO and grandson: Alex Wildman, Boulder, CO. She is also survived by Nephews and Nieces in Israel.

The family of Ann Finkelstein Walters created this Life Tributes page to make it easy to share your memories.