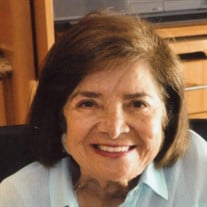 Anna Lee Rubin, 94, of Overland Park, KS, passed away on Wednesday, April 10th, 2019. Funeral services will be 1:00pm Sunday, April 14, 2019 at The Louis Memorial Chapel, 6830 Troost Avenue, Kansas City, MO with burial to follow at Mt. Moriah Cemetery, New Reform Section. In lieu of flowers, the family suggests contributions to the Alzheimer’s Association (www.alz.org). Anna Lee was born January 8, 1925, in Kansas City, MO, the daughter of Albert and Margaret Strauss Lowenthal, and was a lifelong area resident. She was married to the love of her life, Irving Coleman Rubin at Oakwood Country Club in 1945. They were married 65 years before his death on April 13, 2011. Anna Lee was a member of the New Reform Temple and the Oakwood Country Club. She was an active member of the Kansas City community including acting on the Board of the KC Philharmonic Association, past president of the Fireside Committee of the Kansas City Art Institute where she was an Honorary Trustee and the National Council of Jewish Women. She was involved with the 1972 dedication of the Kansas City Airport which fit her passion for traveling, including traveling the world (even to Antarctica!) with Irving and taking each of her grandchildren on a global adventure when they were still young. Anna Lee ultimately became a travel agent and member of ASDA supporting the travel dreams for her clients from 1967 until 2000. On a national level, she was heavily involved with Civil Defense after attending Civil Defense Staff College, Battle Creek, Michigan and being appointed in Washington, DC by invitation, before President Eisenhower’s Manpower Commission. While serving in this position, she wrote the evacuation plan for Kansas City in the event of a manmade disaster and became the Regional Chairman of the Women’s Division for Civil Defense for 8 states. As Chairman, she was invited by the Atomic Energy Commission to witness the detonation of an Atomic Bomb, the Keppler Shot, in 1957 in Mercury Flats, Nevada. After arriving in Mercury Flats, she was told due to being of childbearing age she was no longer allowed to attend. Anna Lee didn’t like the word “no” and convinced them otherwise. She hung a photograph of the Keppler Shot in her home as a reminder not only of her accomplishments but to remind others to not underestimate the power of driven women. Anna Lee is survived by her daughter: Linda Watson; son: Charles Rubin and his companion, Linda Ingram; grandsons: Michael Watson and wife, Beth and Matt Rubin; granddaughters: Meg Carr and husband Adam and Joanne Edwards and husband Brandon and six great-grandchildren. The family wishes to thank ASANA hospice and mom’s longtime caregivers: Vera Coleman, Bernise Coleman, Stephanie Coleman and Sheba Clarke.

The family of Anna Lee Rubin created this Life Tributes page to make it easy to share your memories.