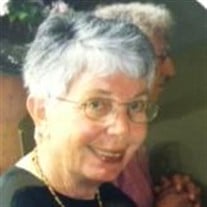 Anna Lee Freshman was born in Parsons, Kansas May 11, 1932 and died March 13, 2015 in Denver, Colorado. She was preceded in death by her sister, Rosalyn Wiener. She is survived by her husband, Arnold L. Samuels, sister, Myra Sue (Susie) Freshman, children; Sara and Chuck Michaels, Karen and Dallas Jones, Sheldon and Lisa Samuels, Linda and Ali Zalzala, grandchildren; Shayna, Samuel, Benjamin, Natalie, Shannon, Jason, and Stacy. She was a graduate of MU and a member of Alpha Epsilon Phi sorority. After moving to Kansas City, she began her career working at Midwest Research Institute as a mathematician and ssistant to Yudel Luke. In 1954 she married Arnold Samuels and began her many years in Kansas City making many many friends. She is most known for her cooking, sewing, and knitting skills. She made everything from scratch, even gefilte fish, sponge cakes, and matzo ball soup. At Passover, her table stretched through the dining room and living room. Her food was served hot and delicious without any help. Just prior to her death she was active, as volunteer librarian at her residence, and worked in the gift shop at the children's hospital. If a stuffed animal needed attention, she took it home and carefully mended it, returning it to the hospital. Anna Lee was unmatched for her ability to value each person's uniqueness, and accepted each as her friend, if not family. She will be greatly missed by all. A Memorial Service was held at Temple Sinai in Denver on Sunday. The family suggests donations to Juvenile Diabetes Research Foundation, 26 Broadway, 14th Floor, New York, New York 10004. Memorial Service for friends in Kansas City area at the JCC Heritage Center 5801 W. 115th St. Overland Park, KS 66211, Wednesday, April 1, 7pm.

Anna Lee Freshman was born in Parsons, Kansas May 11, 1932 and died March 13, 2015 in Denver, Colorado. She was preceded in death by her sister, Rosalyn Wiener. She is survived by her husband, Arnold L. Samuels, sister, Myra Sue (Susie) Freshman,... View Obituary & Service Information

The family of ANNA LEE SAMUELS created this Life Tributes page to make it easy to share your memories.