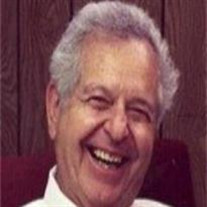 Archie Dworkin, 94, passed away January 16, 2012 at his home at Lamar Court. Funeral services will be at 11:00am Thursday, January 19, 2012 at The Louis Memorial Chapel, 6830 Troost Ave. Kindly omit flowers. The family suggests contributions to a charity of the donor’s choice. Archie was born October 23, 1917 in St. Joseph, MO, the youngest child of Sam and Rose Dworkin. The family moved to Kansas City when he was a child. Archie attended Kansas City schools, graduating from Paseo High School and later attended junior college. He enlisted in the US Army Air Corps and in 1945, while stationed in Roswell, New Mexico married his former neighbor and love of his life for over 42 years, Thelma. Archie started his own business Archie Dworkin Co., in 1958 as a manufacturers Rep in the plumbing and heating industry. He turned the daily operation of the family business over to his son Sam in 1989. Archie stayed active in the business and did not retire until the age of 84. He was beloved in his industry and by his customers. He was a founding member of the Kansas City chapter of the American Society of Plumbing Engineers. Archie was a member of The Temple, Congregation B’nai Jehudah and a former member of Kehilath Israel Synagogue. He was an active member of both B’nai B’rith and R.O.M.E.O’s. Archie was preceded in death by wife: Thelma Dworkin; brothers: William and Edward Dworkin; second wife: Irene Dworkin. He is survived by sons and daughters-in-law: Bob and Connie Dworkin, Omaha, NE, Sam and Kellie Dworkin, Lenexa, KS; daughter and son-in-law: Ellen and Doug Smith, Austin, TX; grandchildren: Ashley, Alex and Garrett Dworkin, Kimberly Clark and Travis Kelsey; great-granddaughter: Kelsey Clark.

The family of Archie Dworkin created this Life Tributes page to make it easy to share your memories.