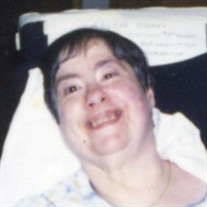 Arlene Stern, 75, died Saturday, February 24th, at Village Shalom. Her cousins Nancy Hipsh Wolff, Harlene Hipsh and staff from Village Shalom were by her side. A graveside service will be held at 2:00pm Monday, February 26, 2018 at Sheffield Cemetery. Donations in her memory can be sent to Village Shalom or a charity of one’s choice. Arlene was born in Canada and diagnosed with cerebral palsy. In 1967, at age 25, Arlene’s mother passed away. Sensing she had a lot of time on her hands, Arlene’s father encouraged her to do something with her mind. Arlene decided to start collecting photographs of movie stars. It was through local TV stations that she was able to collect most of the photographs of local TV personalities, movie stars and politicians that were popular during the years she assembled her collection of over 20 albums. Next, Arlene started a Wake-Up Service, which she ran for many years. She would call people from her bed in the morning and wake them for work. After moving to Village Shalom, Arlene met and studied art under the direction of Sherri Jacobs. Sherri taught Arlene how to paint by putting a paintbrush in her mouth. Arlene painted pictures and greeting cards. Her work was featured in many art shows and hangs in many homes. Because she could not write, Arlene simply remembered - every name, every birthday, every anniversary. She loved Bingo. Her birthday parties were legendary. She was a great judge of character, had a great sense of humor and spoke bluntly. She never walked but she did not sit around. She was an inspiration and example. From the time Arlene’s father died in 1975, she lived in nursing homes. She was at one home for a short period and then moved to the Shalom Geriatric on Holmes until they closed. Arlene was proud to be in the first group of residents to move from Shalom Geriatric into the Weinberg Health Center at Village Shalom in 2000. She lived there for the rest of her life. Many people were amazed that Arlene was 75 on her last birthday. She lived on love - the love of her cousins, including Vicki and Alan Bronfman, and her many, many friends and the staff at Village Shalom. Don Cohen was her loyal doctor and provided her with loving care and encouragement all these years. Many people who walk through the main entrance at Village Shalom will miss seeing Arlene in her wheelchair facing the front door.

Arlene Stern, 75, died Saturday, February 24th, at Village Shalom. Her cousins Nancy Hipsh Wolff, Harlene Hipsh and staff from Village Shalom were by her side. A graveside service will be held at 2:00pm Monday, February 26, 2018 at Sheffield... View Obituary & Service Information

The family of ARLENE JANET STERN created this Life Tributes page to make it easy to share your memories.