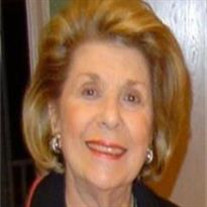 Our beloved mother, Arlene Jacobs, passed away on May 30th, 2011 surrounded by her loving family. She was born in Kansas City, Missouri on July 21, 1928 to Samuel and Gertrude Greenberg. Mom graduated from Southwest High School and then attended the University of Texas at Austin. She was married to Donald Intrater for 35 years and they had four children together, Rick, Carol, Janet, and Bill. Mom later married Norman Jacobs and they spent 19 happy years together. Although raising her family was very important to her, she was active in many causes in the community, including the Parkinson’s Foundation and numerous Jewish organizations. She was a member of both Beth Shalom Synagogue and The Temple, Congregation B’nai Jehudah. Mom was an accomplished business woman who helped run The Steven’s Envelope Company in Kansas City, Missouri with her brother Lionel Greenberg. She had a great appreciation for art and a flair for interior design. Mom had immeasurable pride in her children, their spouses, her grandchildren and was blessed with three great grandchildren and had one on the way. They brightened her life every day. She is survived by her brother Lionel Greenberg and his wife Joanie, her children Rick and Roberta Intrater of San Francisco, California, Carol and Mark Rosenfeld of Boca Raton, Florida, Janet and Steve Gershon of Overland Park, Kansas, and Bill and Lynn Intrater of Leawood, Kansas, and step children Sandy and Marc Jacobs, and Terri and Brian Jacobs. She was blessed with eighteen grandchildren, David and Tracy Rosenfeld, Michael Rosenfeld, Lindsay and Michael Fineman, Bob Gershon, Tim Gershon, Brandon and Alana Intrater, John Intrater and his fiancée Emily Lerman, Evan Intrater, Katie Intrater, Lauren Intrater, Aaron Jacobs, Ryan Jacobs, Andrea Jacobs, and Megan Jacobs, as well as her great grandchildren Madison, Brooke and Brendan Rosenfeld. Mom will also be greatly missed by Harrison, her beloved Maltese. We’d like to thank her wonderful care givers at Village Shalom, and Menorah Medical Center. A memorial service will be held at 10:00 am on Thursday June 2nd at The Louis Memorial Chapel, 6830 Troost Avenue, Kansas City, Missouri 64131. Burial will follow at Rose Hill Cemetery. In lieu of flowers, the family suggests a gift to Village Shalom, 5500 West 123rd Street, Overland Park, Kansas, 66209, or the charity of your choice.

Our beloved mother, Arlene Jacobs, passed away on May 30th, 2011 surrounded by her loving family. She was born in Kansas City, Missouri on July 21, 1928 to Samuel and Gertrude Greenberg. Mom graduated from Southwest High School and then attended... View Obituary & Service Information

The family of Arlene Greenberg Intrater Jacobs created this Life Tributes page to make it easy to share your memories.