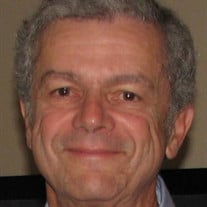 Arnold Zell Balanoff, 79, of Overland Park, Kansas, passed away peacefully at home Monday, May 2, 2022. Funeral services are at Louis Memorial Chapel at 11 a.m. on Wednesday, May 4, followed by a graveside service. Shiva is at 7 p.m. on Wednesday, May 4 and Thursday, May 5 at 3106 W. 150th Terrace in Overland Park, Kan., 66224 in The Villas of Ironwoods, off 151st Street between Mission and State Line. Kindly omit flowers. The family suggests contributions to St. Jude Children's Research Hospital. Arnie was born August 3, 1942, to the late Reva and Morris Balanoff. He grew up in Des Moines, Iowa, surrounded by extended family that included his beloved Papa and Baube, Russian immigrants who found success running their family-owned grocery store. Drawn to the medical profession from a young age, Arnie earned his medical degree from the University of Iowa, where he met and married the love of his life, Diane. They settled in the Kansas City area after a few years in San Antonio, Texas, during his time as an officer in the U.S. Air Force. In Kansas City, Arnie dedicated himself to the care of children as a pediatrician known for his gentle bedside manner, an uncanny ability to make babies smile, and unwavering patience for the parents who depended on his reassuring advice. His passion for helping others extended to communities in Romania and Cuba, where he served on medical missions. Away from the office, Arnie savored family life and traveling adventures that took him and Diane around the world. He often captured their experiences with his camera as an avid photographer who used a darkroom to develop his own images before the digital era. He also loved music, and he cultivated in his children an appreciation for everything from classical to country. Later in life, Arnie’s world centered on his grandchildren, and nothing made him happier than sitting in a room full of family, listening to everyone talking (and laughing) at the same time. To call Arnie a doting husband and father would be an understatement. This is a man whose love overflowed in all directions. Family and friends alike knew they could count on him any time, night or day, for level-headed advice, an incredible sense of optimism that never faltered, and a sense of humor that had a way of making even life’s toughest challenges seem more manageable. He is survived by his wife Diane; son and daughter-in-law Aaron and Dianna Balanoff of Carmel, Indiana; daughter and son-in-law Debbie and Jeff Chase of Overland Park; son and daughter-in-law Brian and Christa Balanoff of Overland Park, and seven grandchildren: Oscar, Talia, Sam, Graham, Josh, Madeline and Simon.

Arnold Zell Balanoff, 79, of Overland Park, Kansas, passed away peacefully at home Monday, May 2, 2022. Funeral services are at Louis Memorial Chapel at 11 a.m. on Wednesday, May 4, followed by a graveside service. Shiva is at 7 p.m. on Wednesday,... View Obituary & Service Information

The family of Arnold Zell Balanoff created this Life Tributes page to make it easy to share your memories.