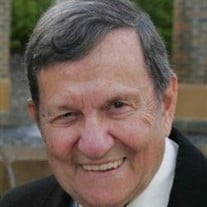 ARNOLD TED PARRIS May 27, 1930 – November 15, 2016 Arnold Ted Parris, devoted husband of 60 years, father, grandfather, brother, uncle and friend to everyone he met, died on November 15 shortly after watching his beloved University of Kentucky Wildcats win just one more game. Arnold was born in Louisville, Kentucky to parents Rose and Harry Parris. He and his siblings Gabriel, Dave and Dena grew up working for their father’s neighborhood grocery store on Brook Street, where Arnold sold grocery bags at an early age for one for .03, two for a nickel. Arnold was a storyteller, and no one in his family ever forgot the story of when he fell headfirst into a vat of lard at the Parris Grocery while reaching to pour a bucket for a customer. With his typical humor, he said his hair was the shiniest and softest in the neighborhood for at least a month. Arnold graduated from the University Of Kentucky School Of Pharmacy in 1952, where he was a member of the Alpha Zeta Omega pharmaceutical fraternity, and entered the U.S. Army. He was stationed at Madigan Army Hospital at Fort Lewis in Seattle-Tacoma, Washington; there, he would also meet his future wife, best friend and love of his life, Stella Shemarya. They married in 1956, and Arnold moved his bride back to his Louisville hometown, where they grew their family by a daughter and a son. Arnold’s entrepreneurial roots would bear him in good stead when he opened his own neighborhood business, Mohawk Drugs, located on a street by the same name in Louisville. History would repeat itself as he raised his two children in the back of that corner drug store, teaching them how to properly dust shelves, stock merchandise, serve sweet concoctions at the soda fountain, and eventually ring the cash register. He was a humble pharmacist known as “Dr. Parris” who delivered prescriptions in his white pick-up truck to customers too sick to come to his drug store, who always warmly welcomed neighbors to his soda counter, who savored time with his beloved bride -- with whom he never, ever stopped holding hands – who found great joy in his kids, grandkids and loving extended family, and who always had a laugh, an internet story, a joke or a quip for friends, both old and new. He is survived by his best friend in life and wife of 60 years, Stella, his daughter, Roshann Shemarya Parris and her husband Jeff Dobbs, his son, Harry Jack Parris, two grandchildren, Justin Parris Cohen and Tessa Diana Cohen who lovingly called him “Papu,” two cherished grandpups, Ambassador and Madam Senator, numerous nieces, grand-nieces and nephews to whom Uncle Arnold was especially close, and many wonderful, lifelong friends who will always remember his storytelling, his endearing humor, his love of BBQ, long walks, the stock market, Israeli coin-collecting and his endless nights of Kentucky and Louisville basketball and football on a bar stool with family and friends. The family welcomes friends to a graveside service on Friday, November 18 at 2 PM at Mount Moriah Cemetery, 10507 Holmes Road. In lieu of flowers, the family would warmly welcome contributions to Village Shalom, Jewish Family Services Food Pantry, and Kansas City Pet Project.

The family of ARNOLD TED PARRIS created this Life Tributes page to make it easy to share your memories.