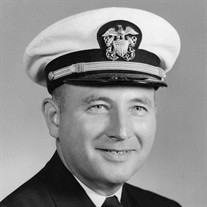 After leading a full life for 94 years, Arnold Lewis Waxman passed away peacefully on February 25th in Harlingen, Texas, where he and his wife, Kathaleen, spent their winters. He was surrounded by family. Graveside services and interment will be 2:00pm Thursday, March 1, 2018 at Mt. Carmel Cemetery, 5529 Ditzler, Raytown, MO 64133. In lieu of flowers, memorial contributions may be made to the Jewish National Fund or to a charity of the donor’s choice. Born in Albany, NY, Arnie graduated from the University of Minnesota with degrees in Mechanical and Electrical Engineering. In WWII, he served on a destroyer escort as a Naval officer. In 1950, Arnie married Elaine Kahn, with whom he raised five sons. He returned to active duty during the Korean War, and he remained in the Navy until retiring from service in 1968. While stationed in Nebraska, Arnie maintained his Jewish identity by establishing a local Hebrew school. He and Elaine also ensured that all Jewish families on the base in Puerto Rico could attend Passover Seders in San Juan. The family then moved to the Kansas City area, where Arnie spent 17 years as an engineer and construction manager for Hallmark Cards. In this position, he organized a cleanup effort at The Plaza during the 1977 Kansas City flood. He retired in 1985, shortly after Elaine passed away. During his 33 year retirement, Arnie enjoyed traveling, visiting family, and engineering projects at his beloved farm near Osawatomie. His favorite pastime was dancing, which he taught for many years. He even orchestrated group dances well into his 80’s. Those who knew Arnold will remember him for his worldliness, tough exterior yet warm interior, and dedication to his extensive family. Arnold was preceded in death by his wife Elaine in 1984, wife Mary Lou in 1997, son Mickey in 2014, parents Meyer and Fannie Waxman, brothers Jerry and David Waxman, and sisters Lillian Kupperberg and Selma Margolis. He is survived by his wife Kathaleen; brother Irwin and Irma Waxman; sister Annette Adams; children Gerald and Monthip Waxman (Thailand), Joel and Susan Waxman (Overland Park), Dael and Brenda Waxman (Charlotte, NC), and Matt and Janice Waxman (Overland Park); grandchildren Zachary and Barbara Waxman, Elliott and Kelsey Waxman, Molly Waxman, and Meara Waxman; great-grandchildren Reuben and Miles Waxman; and many nieces, nephews, and cousins.

After leading a full life for 94 years, Arnold Lewis Waxman passed away peacefully on February 25th in Harlingen, Texas, where he and his wife, Kathaleen, spent their winters. He was surrounded by family. Graveside services and interment will... View Obituary & Service Information

The family of ARNOLD L. WAXMAN created this Life Tributes page to make it easy to share your memories.