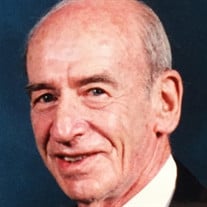 The Abt and Royer families mourn the passing of Arthur Abt at home on November 3, 2017. He was born in the university town of Giessen, Germany in 1920 and grew up there with his stepbrother Hans and sister Irmgard before immigrating to the United States in 1938 with Hans to escape the Nazis. His father Jakob died in the Theresienstadt concentration camp and his mother Hedwig died in the Auschwitz Birkenau extermination camp. Arthur apprenticed as a baker in Germany and resumed that work in America before being inducted into the U. S. Army, by coincidence the day after the Pearl Harbor attack, December 7, 1941, and serving in the 32nd “Red Arrow” Division in the Pacific. Arthur became a naturalized citizen shortly after his honorable discharge in 1945. The following year he married Lottie Seligman Weinman in Chicago while attending the American Institute of Baking and working in the Stevens (later Conrad Hilton) and Palmer House hotel bakeries there. They moved to Kansas City in 1949 where he baked for two more years before becoming a traveling salesman, selling costume jewelry to retailers throughout Kansas and parts of Nebraska, Colorado, and Oklahoma. Upon his retirement in 1985 several of his customers honored him for his honesty and integrity. In retirement Arthur volunteered in the libraries of Research Hospital and Menorah Hospital, and began swimming regularly to keep fit. He loved to travel, showing signs of his future wanderlust when walking down the railway tracks near his home while still a youngster in Germany, and later traveling with Lottie and his children across the United States and then throughout the world. Arthur was an avid and skillful photographer and, along with a hand-written autobiography, left a remarkable visual history of his life, family, and friends. He is survived by Lottie after 71 years of marriage, his children Jeffrey (and wife Mary) and Helen (and husband Mark Royer), five grandchildren, and two great-grandchildren. His quiet and humble demeanor, great strength of character, and self-effacing sense of humor will be missed by all who had the good fortune to know him. There will be a gathering to celebrate Arthur’s life from 2:00 to 4:00 p.m., Saturday, December 2nd, 2017 in the Village Shalom social hall at 5500 West 123rd Street, Overland Park, Kansas, 66209. All are welcomed to join the family there. Gifts honoring his memory can be made to his favorite charity, the Nature Conservancy, or the charity of your choice.

The Abt and Royer families mourn the passing of Arthur Abt at home on November 3, 2017. He was born in the university town of Giessen, Germany in 1920 and grew up there with his stepbrother Hans and sister Irmgard before immigrating to the United... View Obituary & Service Information

The family of ARTHUR ABT created this Life Tributes page to make it easy to share your memories.

The Abt and Royer families mourn the passing of Arthur Abt at...