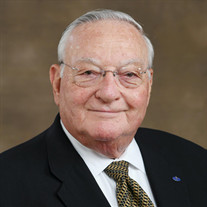 Arthur H. Stoup was 92 years young when he died Wednesday, September 27, 2017. Art, as he is known by his many friends, will be remembered as an ardent patriot, a “lawyer’s lawyer”, a tireless community leader, a loving father – and admired by all he came into contact with. Funeral services will be held at 11am Tuesday, October 3rd at Louis Memorial Chapel, 6830 Troost Ave. Burial will be at Mt. Carmel Cemetery, 5529 Ditzler Ave, Raytown, MO immediately following the service. A reception will follow the burial. In lieu of flowers the family suggests that contributions be sent to the Kansas City Metropolitan Bar Foundation: Military Matters Program in memory of Arthur Stoup. https://donatenow.networkforgood.org/kclegalconnection Art was born and lived his entire life in Kansas City. While he lived in a variety of modest residences early on, Art and his bride of 69 years – Katie – lived for the last 63 years at their beloved home in South Kansas City. Testimony to Art’s pride in his hometown was his uncanny ability to recall the history of streets and buildings and the people that built and inhabited them throughout the metro area. Art never needed and never bought a GPS. Art graduated from East High School in 1942. After enlisting in the Navy in 1942 at the age of 17, he saw active duty as a Quartermaster (navigation specialist) aboard the USS Mobile, CL 63, and took part in all major naval engagements and landings in the Pacific Theatre between April of 1943 and August of 1945, earning a variety of Ribbons and battle stars before being honorably discharged as a Senior Quartermaster at the end of the war. Interestingly, Art was one of the first American sailors to go ashore at Nagasaki, Japan only a short time after the second atomic bomb was dropped. Following the wars end, Art enrolled at Kansas City University where he graduated with both a Bachelor’s Degree and a Law Degree (JD) in 1950. Thereafter, he took up the practice of law as a civil litigator, and practiced his craft for the next 67 years until the time of his death. During his distinguished career, Art tried cases and was admitted to practice in a variety of state and federal court jurisdictions. But simply practicing law was never enough for Art. In addition to advocating for his clients, he advocated for his chosen profession, serving as President of the Kansas City Metropolitan Bar Association and in 1974 -75 as President of the Missouri Bar. A longtime member of the House of Delegates of the American Bar Association, Art was bestowed a variety of honors, including a number of lifetime achievement awards and membership into several prestigious legal societies such as the International Society of Barristers, where he was a proud member for the past 40 years. In addition, he found time to lecture on various legal topics around the country, typically focused on litigation matters. Love of education and the state of Missouri caused Art to undertake a long term relationship with UMKC. From 1972 to 2006, Art served as a Trustee to the Law Foundation of the University of Missouri – Kansas City, where he was President from 1979-1982. In addition, Art was a Trustee at the University of Missouri – Kansas City from 1979 – 2000 and an Emeritus Trustee from 2000 to date. As important as his many awards and volunteer positions were to Art, they paled by comparison with his dedication to the belief that common men and women had the right to proper legal representation. Often acting on a pro-bono basis, Art took cases of needy clients right up until his passing for the simple reason he believed everyone must be treated equally in the eyes of the law. As a result, Art won the admiration of his fellow practitioners as a “lawyer’s lawyer” and from his grateful clients as a tireless advocate of common people. Above and beyond his dedication to community, education and the law, Art was a loving husband, father and grandfather to his four children (David, Dan, Rebecca & Debi), three grandchildren (Phillip, Page & Pierson) and leaves behind his wife and greatest supporter, Katie. The grateful son of an immigrant mother and a father that never had the opportunity to progress beyond the 8th grade, Art met and worked with three American Presidents and hundreds of people from all walks of life. He came to call each of them friends. Art respected everyone. He believed in the goodness of all and his greatest legacy are his hundreds of friends as well as his grateful family. Arthur H. Stoup – a life very well lived. A “Celebration of Life” will be held at the Arthur H. Stoup Courtroom at the UMKC School of Law at 3pm on Friday, November 3, 2017. The address for the UMKC School of Law is 500 E. 52nd St, Kansas City, MO 64110.

The family of ARTHUR H. STOUP created this Life Tributes page to make it easy to share your memories.