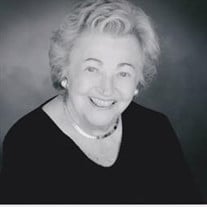 Audree Milgram Klein Baer of Prairie Village, Kansas passed away peacefully in the comfort of her own home, having lived a full rich life. She was 98 years old. Audree grew up in Kansas City, MO, the daughter of her beloved parents, Nat and Fannye Milgram. Together with her brother, Lester, and sister, Charlotte they were part of a large family. One of Audree’s greatest joys in life was to spend time with her extended Milgram Food Store family. She was known as “Miss Audree” and revered by all of the store employees. Audree had a lifelong love of music and at the tender age of 18 was a songstress on WDAF and WHB Radio. Audree graduated Southwest High School. She attended Northwestern University School of Music and the University of Missouri-Columbia. She met the love of her life, Bill Klein, after WWII. They married in 1951 and had four sons: Nat of La Jolla, California; James of Overland Park, Kansas; Robert of Needham, Massachusetts; and Jeffrey, a blessed memory. After Bill’s death in 1979, Audree was remarried 10 years later to Harold Baer of Mission Hills, California, until his passing in 1994. Audree was full of life. In addition to corralling four active boys, she was an avid golfer and volunteer. She served on the Menorah Medical Center Board of Directors and the Hospital Auxiliary Board, where she co-ran the Gift Shop for well over a decade. Among other things, she loved going to market to select her favorite purses to sell. She was a Trustee of the UMKC Conservatory of Music and Honorary Director of Rockhurst College. She served on the Board of Governors of the Hyman Brand Hebrew Academy and took an active role in the Jewish Federation. Audree was loved for her kindness, generosity, and upbeat personality. Her many friends looked to her as a source of strength and inspiration. Audree is survived by three of her sons. She always wanted a daughter and was a “second mother” to Leslie, Lisa, and Jan. She was a loving grandmother to Samantha, Jessica, Melissa, and Taylor. She was a dear friend to Steve Greenberg and Minnie Miller. She will be greatly missed by extended family, friends, and the special caretakers who provided great comfort to her during her last 10 years. There will be a private burial. A public celebration of Audree’s life will be held at Congregation Beth Torah on Tuesday August 28, 3:30pm. Immediately following, family and friends are invited to a Shiva service at the home of James and Lisa Klein, 9830 Ash Drive Overland Park, Kansas. In lieu of flowers, the family kindly requests contributions to Village Shalom.

Audree Milgram Klein Baer of Prairie Village, Kansas passed away peacefully in the comfort of her own home, having lived a full rich life. She was 98 years old. Audree grew up in Kansas City, MO, the daughter of her beloved parents, Nat and... View Obituary & Service Information

The family of AUDREE MILGRAM KLEIN BAER created this Life Tributes page to make it easy to share your memories.