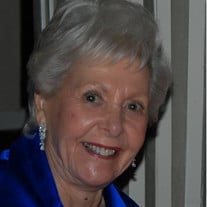 Audrey Rubenstein Manne 86, a beloved mother, grandmother, sister, and friend passed away early Saturday morning, April 18, 2015, in Kansas City. A resident of Miami Beach, Florida, Mrs. Manne was in her native Kansas City visiting family. Audrey was born and raised in Kansas City Missouri and was the daughter of Leo and Frances Rubenstein. She was a graduate of Southwest High School. She went on to earn a bachelor’s degree from Mac Murray College in Jacksonville, Illinois. Throughout her early life Audrey was athletic and excelled at swimming and tennis. She was a talented and competitive swimmer and she taught the sport to children for many years. In 1967 she married Leon A. Manne of Miami Beach and they celebrated 46 years of marriage before his death. The Manne’s were highly respected and well known throughout south Florida. Audrey was a devoted supporter of Israel and was an active member of the Jewish Federation. She was also passionate about the arts and was an enthusiastic patron and supporter of several arts organizations in the Miami area. The Mannes’ were involved in many civic causes in Miami Beach including the construction of a new convention center and encouraging the construction of new hotels to accommodate the increased commerce. She was known as “Audie” a nickname her grandchildren created. She had a zest for life and new experiences. She traveled extensively for business and pleasure throughout her life with Leon. She was known for her gracious hospitality to friends and family. She was profoundly kind and compassionate. She opened and welcomed people to her home. Audie made lifelong friends wherever she was. She had a particular gift in forming strong and lasting bonds with young people and was a mentor to many young men and women. She is survived by her cherished daughter and son in law, Suzy and Steve Block of Mission Hills, Kansas, her much loved grandchildren and their spouses Max and Katie Wasserstrom and Leigh and Constantine Farmakidis, her beloved brother Richard Rubenstein of Kansas City, Missouri and devoted nieces and nephews. It would be an oversight not to mention another love in her life, her Maltese and best four legged friend,” Benny.” Audie will be dearly missed by her entire family, extended family and her many friends in Kansas City and Miami Beach. Memorial services will be held Wednesday, April 22nd at the Louis Memorial Chapel, 6830 Troost Avenue. In lieu of flowers, the family asks that contributions be sent to the Greater Miami Jewish Federation, 4200 Biscayne Blvd, Miami, FL 33137 or the New World Symphony, 500 17th Street, Miami Beach, FL 33139

The family of AUDREY RUBENSTEIN MANNE created this Life Tributes page to make it easy to share your memories.