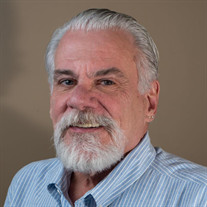 Dr. Avery Bratt died on September 10th, 2020 at the age of 64 of several chronic health conditions amidst a global pandemic, an increasingly disgruntled planet, and surrounded by his wife and three children. “Sometimes we live no particular way but our own…” Avery was born on November 22nd 1955 in Chicago, Illinois to a couple who weren’t able, at that time, to usher in the light and gift that was to become Avery. Loved and raised by Aleck and Anne Bratt in Kansas City, Avery was a brilliant and mischievous child and an integral part of the KC Bratt family clan. Known for his curiosity, generosity, and wild-side, Avery attended Kent State, then the University of Oklahoma in the mid 70’s for undergrad and Texas Tech for his PhD in Counseling Psychology. As a child of the 60’s and 70’s Avery was a music lover, wrapping himself in the grooves and jams of the Grateful Dead, Talking Heads, Eric Burdon, Jim Morrison, and he even jammed with Canned Heat during a layover at MCI. Avery studied and lived the human condition through his love of music, his career, and through the nurturing of his own family. He met his wife, Laura, in 1985 at Texas Tech. A kindred spirit, she had enrolled in the same counseling psych program at Tech. Following a wild love that brought them from Texas to Florida, they gave birth to their first child, Ashur Ellis, in Merritt Island, Florida in 1989. Micah Teva soon followed in 1990, Hanah Marlee in 1993, and Aleck Teva in 1997 in Kansas City. “Every silver lining’s got a touch of grey…” Avery was generous, kind, curious, and he carried some heavy weights in this world. His desire to be good, to leave the world better than when he found it, and to invite, exude, and cultivate unconditional love often overshadowed his natural inclination towards flow, chill, and ease. And when he tried to change the world and the world spat back, it left him feeling a bit too small. Jerry sings, “There is a road, no simple highway, between the dawn and the dark of the night,” and Avery was a frequent driver navigating the gap between light and dark. If you ask the thousands impacted by Avery’s life they’d describe him as, “light, care-free, mellow, intelligent, and respectful.” Avery was an adamant hippie carrying the burden of the world’s weight without the willingness to shed or share the load. He touched the lives of thousands in the world of mental health and neurofeedback and shared his gift for healing with so many. He is not alone in leaving a legacy of healing work in the form of Midwest neurofeedback and three amazing children: A joyous renaissance man, an intuitive teacher, and a radical and unreasonable free spirit. Avery created a space for his children and those around him to be the people they wanted to be. “The grass ain’t greener, the wine ain’t sweeter, either side of the hill,” Jerry belts out as he lays down a final track to a crowd of thousands on an open lawn. Avery was always trying to get to that greener side and bring everyone with him. We implore you, to stop, breathe, and look around at just how green your grass is right where you are.

Dr. Avery Bratt died on September 10th, 2020 at the age of 64 of several chronic health conditions amidst a global pandemic, an increasingly disgruntled planet, and surrounded by his wife and three children. &#8220;Sometimes we live no particular... View Obituary & Service Information

The family of Dr. Avery H. Bratt created this Life Tributes page to make it easy to share your memories.