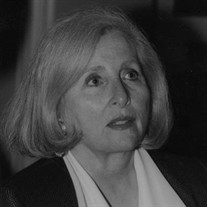 Barbara Rhea Seigel Brown was born May 17, 1931, to Necoma and Eli Seigel of St Louis, Mo., and died on December 4, 2021, at Village Shalom. Despite the Depression and the war years, her girlhood and young adulthood were filled with interests and friends, some of whom would accompany her for nearly all of the decades that followed. While still a college student at the University of Missouri, Barbara met Bernard H. Brown, from Kansas City, and after a whirlwind courtship they married in March 1952. Her life revolved around nurturing her family, which included three children, Sherri Brown, Kim Brown Fader and Bruce Brown, and she thrived in family and social roles in her community. She was active as a volunteer in several organizations including the Sisterhood of B’nai Jehudah, the National Council of Jewish Women, the Menorah Auxiliary, and she was a committed Democrat. She and Bernard were lifelong members of the New Reform Temple. In the 1970s she started a boutique jewelry business, 18K, with her dear friend Margery Greenberg. Barbara’s maternal grandfather, Meyer Hurwitz, owned a jewelry business in East St Louis, Ill., and she always felt she had the jewelry business in her blood. As business partners, Barbara and Marge travelled annually to the jewelry show at the New York Hilton, met with nationally recognized designers, and created a collection with signature flair. Later in life, Barbara earned a license in real estate and worked as an agent with ReeseNichols in Kansas City. Matching people with houses and neighborhoods was a natural talent of hers. Barbara loved colors, flowers, design, beautiful surroundings and sharing food, family warmth, and the company of unpretentious people. She was also fiercely protective of the people she loved. A great sadness in her life was the loss of her daughter Sherri to complications of multiple sclerosis in 2005. She was pre-deceased by her husband Bernard in 2011, but continued to devote herself to her grandchildren and lived to see the birth of three great-grandchildren. She leaves behind her sister Dale Seigel Mnookin (Robert); her children Kim Brown Fader (Ira Spiegel) and Bruce Brown (Amy Rifkind); her son-in-law David Braun (Ellen); her grandchildren Eric Braun (Lauren Acker), Benjamin Fader, Elisabeth Braun-Lilenfeld (Casey Lilenfeld), Sophie Fader (Haakon Lenzi), Rebecca Rifkind-Brown and Sam Rifkind-Brown; three great-grandchildren and her nieces Sara Sher, Loren Brown, Ronna Brown, Jennifer Mnookin and Allison Mnookin. The family gratefully thanks the nurses and health aides of Village Shalom for their kindness and careful attention over the years of her residency along with Dr. Alexander Davis and Marcia Burns, her steadfast friend and companion. Donations in her memory may be made to Village Shalom https://www.villageshalom.org/donate/ or to Planned Parenthood Great Plains (Kansas) https://www.plannedparenthood.org/planned-parenthood-great-plains

Barbara Rhea Seigel Brown was born May 17, 1931, to Necoma and Eli Seigel of St Louis, Mo., and died on December 4, 2021, at Village Shalom. Despite the Depression and the war years, her girlhood and young adulthood were filled with interests... View Obituary & Service Information

The family of Barbara Brown created this Life Tributes page to make it easy to share your memories.