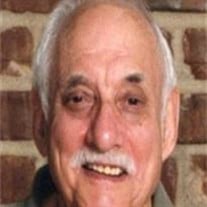 Barney Summers, 91, of Prairie Village, KS died Friday afternoon, November 4th, 2011 at Rose Estates Assisted Living Facility. Funeral service will be at 2:30PM Sunday, November 6th, 2011 at the Louis Memorial Chapel, 6830 Troost Ave. Burial will be at Mt. Carmel Cemetery. The family requests no flowers and suggests contributions to Harvester’s, Project Warmth, or the charity of one’s choice. Barney was born in Kansas City, Missouri on September 13, 1920 to Sam and Sarah Summers. He married Alberta J. Solomon, October 16th, 1949 and they lived in Prairie Village their entire married life of 58 years. Barney was a member of Congregation Beth Shalom. He went to work for his dad at Missouri Fish Company in Kansas City in October 1950. He and Alberta took over the business when Sam retired in 1968. They operated Missouri Fish Company until he retired and closed the business in 1993. Barney was a Staff Sergeant in the Army Air Force during World War II and was awarded 4 Bronze Stars and the Good Conduct Medal. He was honorably discharged in October 1945. He was a Member of the Ivanhoe Lodge # 446 of the A.F & A.M. of Missouri for over 50 years and the Ararat Shrine. Barney was a member of MENSA. He was also one of the last surviving members of the “Triad Fraternity” that met every year for a luncheon that included many of his closest friends. Barney was proceeded in death by his parents; his wife, Alberta (February 4th, 2008) and his eldest son, Gary (July 1st, 2011). He is survived by his son, David Summers of Overland Park; daughter, Cynthia Feldman (Robert) of Dallas; son Jeffrey Summers (Stephanie) of Overland Park; daughter-in-law, Debora Summers; eight grandchildren: Joshua Feldman, Matthew Feldman, Emily Summers, Sarah Summers, Dara Feldman, Evan Summers, Lydia Summers and Alexa Summers, along with his great-granddaughter, Eliana Summers. He is also survived by his brother, Charles Summers of Kansas City; and his sisters: Shiffy Cohen of Oceanside, CA. and Dorothy Blank of Boston, MA., his sister-in-law, Eleanor Levine of Chicago and brother-in-law, Mel Solomon of Kansas City. Barney loved life, family and work. He was a loving person who always easy going with a smile on his face and a twinkle in his eyes. Everybody loved Barney! The family would like to say Thank You to the staff of Continua Hospice and the staff at Rose Estates for their care in ‘holding down his chair’, his ‘t-bone steak’ and ‘bourbon and ginger ale’.

The family of Barney Summers created this Life Tributes page to make it easy to share your memories.