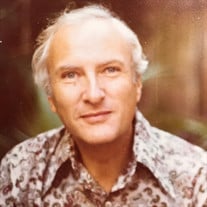 Barton Lee Hakan, 95, died on November 28th, peacefully and in his own bed after enjoying a great Kansas City victory against the Broncos. Bart was born June 15th, 1921 in Kansas City, MO to Louis Hakan and Bertha (Finkelman) Hakan. He attended Troost and Border Star elementary schools and Southwest High School. He graduated from MIT and was immediately commissioned as an officer in the US Navy during World War II. As a 21 year old lieutenant, he supervised the operations of one of the largest plants making warheads for the naval ships. After the war he became a life long pacifist. In 1942 he married Mary Barbara (Pendelton) Hakan. During their 32 yr. marriage they raised four sons and one daughter. In a generation where fathers were often not as involved in the activities of their children’s lives, Bart was a very involved father. He was a scoutmaster for the Mic-O-Say tribe, organized regular neighborhood ballgames, and read to his kids before bed. He drove his kids to guitar lessons, tennis lessons, tournaments, college searches, and many more activities. He provided well for his family as the owner and CEO of MoKan and LuBar Chemical Companies. He was playful, funny, and hardworking. He valued education, life long learning, curiosity, being interested in others, politics, current events and encouraged his children to value them as well. He took up tennis in his 40’s and marathons in his 50’s. At 60 he won Hospital Hill in his age division and broke the course record. He was a strong presence in the Kansas City community where his passion for politics, education, and civil rights played a large role. His biggest regret was not having been part of the March on Selma. He helped the campaigns of local and national candidates. He served on the Kansas City Missouri School Board, always fighting for better education and schools in the inner city. This work continued into his 80’s and 90’s with LINC. He served on many non-profit boards by mentoring and consulting. Included in these are Gillis Home, LINC, Executive Service Corp, Mattie Rhodes, and Linus Pauling Institute. As a feminist, he financially supported women in politics and was hoping to see a woman be president before he died. He supported Planned Parenthood and the Hemlock Society, believing in the individual’s right to choose. In 1975 he married Carm (Palazzo) Hakan and remained very happily married for 41yrs. He adopted and raised her son Anthony. Together Bart and Carm had wonderful years of running a business together, traveling, playing tennis, hosting family parties, and socializing with dear friends. They had a loving romance that was truly present every day until his death. Bart was an exceptionally loving and kind. A good man. He made everyone he spoke to feel they were the most important person in the world. And when he spoke to someone he honestly believed they were wonderful and had something valuable to offer the world and him. He was extremely generous, thoughtful, intelligent, funny, and modest, but above all else kind. His kindness to anyone and everyone was his greatest gift. His family knows this is his greatest legacy and will strive to carry it on. He is preceded in death by two sons Andrew (Andy) and Eric (Ricky) due to two tragic accidents when they boys were 16 and 10 respectively. He also lost one grandson, Paul. He is survived by his wife Carm; four children Chris, David, Ann, and Anthony; six grandchildren Robin, Lou, Becca, Nathan, Maddie, and Claire; four great grandchildren; and many many wonderful and dear friends. A celebration of life will be held on Sunday, December 18th 2-4pm, 5401 Brookside Blvd (Crestwood Condominiums in the Crestwood Room), KCMO. In lieu of flowers donations can be made to Planned Parenthood or The Linus Pauling Institute at Oregon State University.

Barton Lee Hakan, 95, died on November 28th, peacefully and in his own bed after enjoying a great Kansas City victory against the Broncos. Bart was born June 15th, 1921 in Kansas City, MO to Louis Hakan and Bertha (Finkelman) Hakan. He attended... View Obituary & Service Information

The family of BARTON LEE HAKAN created this Life Tributes page to make it easy to share your memories.