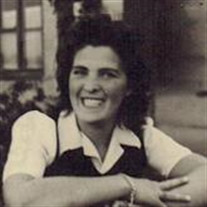 At 93 years, Bella (Przygoda) Manes died peacefully of old age on December 6, 2019 in Overland Park, Kansas at Village Shalom where she had lived for approximately ten years. Bella was born April 26, 1926 in Sierpc, Poland to Dora (Pogozielicz) Przygoda and Succah Przygoda. Nazis began occupying her hometown of Sierpc when she was thirteen years old, forcing her family to move to Warsaw, Poland a few months later. After three years in the Warsaw Ghetto, she was relocated in December 1942 to Auschwitz, the Nazi’s largest concentration camp, where she remained a prisoner until November 1944 when she was transported to Salzwedel, Germany, a women’s satellite camp of the Neuengamme concentration camp. Bella and the other prisoners were liberated by members of the Ninth U.S. Army on April 14, 1945. Except for one sister, all of Bella’s siblings and both her parents were murdered by the Nazis. She was preceded in death by her husband Abraham Manes who was an aeronautical engineer when he died in New York in 1960. Abe, born in Brooklyn, New York, served in the United States Army during World War II as a Photographer Technician in the 42nd Transportation Corp Battalion and was with the forces who liberated prisoners at Buchenwald. During those post-liberation days, Bella and Abe met in Germany after Bella had been liberated from the camps, fell in love and were married on October 11, 1945 in Heidelberg, Germany following the end of WWII (and married again a few days later on October 17 before an Army chaplain.) After marrying, they moved to New York, first living in Brooklyn and then in Long Island where their three children were born. In addition to raising a family on her own, Bella worked at various jobs including the hair salon of her husband’s family in Brooklyn NY and later at the retail store Ohrbach's in Long Island. She also provided elder care and owned rental property in mid-town Kansas City after moving there in the 1970’s. Bella leaves her son David Manes; daughter Hillary Muller and husband Milton; son Rob Manes and wife Mindy; grandchildren Alex Muller, Claire Muller, Jessica Eberline and husband Tom, and McKinzey Manes and partner Michael Zeets; and great-granddaughters Heidi and Josephine Eberline. Bella’s funeral will be held in a brief service on Monday, December 9 at 10:30am at The Louis Memorial Chapel located at 6830 Troost Avenue, Kansas City, Missouri 64131. A memorial service/life celebration to remember Bella and to share stories of what she meant to us will be held on Sunday, December 22 at 1:00pm in the Synagogue and Social Hall at Village Shalom, 5500 W. 123rd Street, Overland Park, Kansas 66209. Special thanks are expressed to the exceptionally caring staff at Village Shalom for their dedication and patience. In lieu of flowers, memorials may be made to Village Shalom Charitable Giving. https://www.villageshalom.org/ways-to-give/charitable-giving

The family of Bella Manes created this Life Tributes page to make it easy to share your memories.