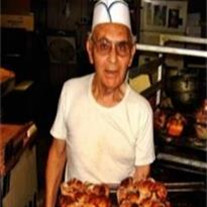 "Baker Ben" Hellman died June 3rd, 2012 at age 89. He was born November 6, 1922 to Bertha (Tanhoff) and Morton Hellman. He attended Central High School and K.C. Junior College before being called to the U.S. Army. Due to his aptitude with languages, he was sent to the University of Chicago for a translation program in Latin, German, and Esperanto (an artificial language developed for international use). He was then sent to Normandy as a medic, helping set up the emergency triage and dispensary and later to Walter Reed Hospital. After the Army, Ben earned a degree in journalism at University of Missouri thanks to the G.I. Bill. A New Year’s Eve blind date led him to his wife of 63 years, Shirley (Lansky). Ben trained as a baker with Shirley’s father and worked in the family business at Hyman’s Bakery, 5th & Minnesota in KCK. When Hyman retired, Ben moved much of his bakery equipment to a shop in his home and continued baking for friends, family, Congregation Beth Torah, and many arts organizations in Kansas City until 2007. Ben worked for many years as the head pastry chef at the Hotel Muehlebach in Kansas City, baking beautiful event pastries for their famous clientele. Ben loved baking and most family memories include a cinnamon babka, often shaped into letters commemorating the event. He said baking was a joy as he got to both start and complete the job, and someone got to enjoy his work every day. Ben enjoyed being a husband, father, and grandfather, taking advantage of the wee hours of work to take time to enjoy his family roles. He loved the Arts in Kansas City: The Kansas City Symphony, Kansas City Repertory Theater, The Kansas City Ballet, Lyric Opera, Quality Hill Playhouse, Chamber Music, Unicorn, Heartland Men’s Chorus, and the varied events at Yardley Hall. He enjoyed watching new theaters begin and grow. He often spoke of "quality of life" including appreciating classical music. He maintained his season tickets with the Kansas City Symphony and attended with his daughter, Marcia. He was able to attend the opening season at the Kauffman Center for the Performing Arts, the culmination of many years of cooperation between the arts in the area. Several years ago, Ben was able to participate in an Honor Flight to Washington, D.C., a one day whirlwind trip for veterans of World War II to see their memorial. Ben was a hard worker, a soft and gentle man, and a wonderful and supportive son, husband, brother, father, grandfather, uncle, and friend. He was quiet and unassuming, happily deferring to others wants, needs, and requests and enjoying the moment. His love of the English language often led him to correct grammar and pronunciation errors, and he had an astonishing vocabulary which rolled off his tongue with great humor. Ben leaves his wife, Shirley (Lansky); daughter Marcia Perkins (Chuck); grandchildren Stephanie and Jeff; brother Lloyd (Judy); nephew and niece Rick (Teresa) and Anne, and extended family and friends who gave him much joy. Ben and Shirley were founding members of Congregation Beth Torah, and a memorial service was held there on June 6th. While not a regular attendee of services, he lived his life as an honorable Jewish man in his words, deeds, and values. See a play, listen to a concert, bake something for a friend, and enjoy life as Baker Ben did. L'Chaim! In honor of his love of baking and feeding those he loved, please consider a donation to Harvester's, 3801 Topping Ave., KCMO 64129. Donations can also be made to Honor Flight to allow waiting veterans this experience, Heartland Honor Flight, PO Box 2125, Lee's Summit, MO 64063. Family thanks go out to all of Ben's caregivers at The Atriums over the last five years. His life was truly better because of each and every one of you.

"Baker Ben" Hellman died June 3rd, 2012 at age 89. He was born November 6, 1922 to Bertha (Tanhoff) and Morton Hellman. He attended Central High School and K.C. Junior College before being called to the U.S. Army. Due to his aptitude with languages,... View Obituary & Service Information

The family of Ben Hellman created this Life Tributes page to make it easy to share your memories.