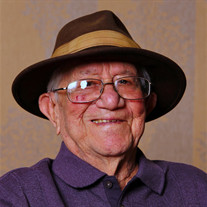 Ben Slotnick, 103, Overland Park, KS passed away Friday, May 16, 2014 at Kansas City Hospice House following a short illness. Funeral services will be 11:30 am Sunday, May 18 at The Louis Memorial Chapel, 6830 Troost Ave. Burial will follow at Rose Hill Cemetery. Kindly omit flowers; the family suggests contributions to Kansas City Hospice House, 12000 Wornall Rd, Kansas City, MO 64145, Heart of America Council - Boy Scouts of America, 10210 Holmes Rd, Kansas City, MO 64131 (www.hoac-bsa.org) or The American Cancer Society (www.cancer.org). Ben was born in Chelsea, MA and moved to Kansas City with his family before the age of two. He began his strong life-long work ethic as a young boy, working in the family delicatessen where his sisters taught him to count change. He delivered industrial laundry for over 40 years. Ben has always been a “little but mighty man”, able to lift 100-pound barrels. Family was always a top priority in Ben’s life. He was married to Helen Schwartz Slotnick, the love of his life for 69 years. They enjoyed dancing and all of the social life in Kansas City. Ben also enjoyed cars, boating, fishing and life at the Lake of the Ozarks. He volunteered at the Jewish Community Center building sets for the Resident Theater satisfying his passion for fixing and building things. He helped in the B’nai B’rith Youth program and will continue to be known as “Uncle Benny” by the hundreds of youth he worked with. Ben was active in the Boy Scouts and was an Honorary Warrior in the Tribe of Mic-O-Say. He was a member of the Teamsters Union and he and Helen were members of the Del Reys. Ben loved to share stories of his life with anyone who would listen. He was always active, often seen zipping around his apartment complex on his blue scooter. He was a current member of The Temple, Congregation B’nai Jehudah and a former member of Beth Shalom Synagogue. Ben was preceded in death by his wife in 2007 and parents: Samuel and Sophie Slotnick. He is survived by sons and daughters-in-law: Marc and Crystal Slotnick, Naples, FL, Barry and Harriet Slotnick, Grandview, MO; grandchildren: Marci Slotnick Cain and Matt Cain, Scott Slotnick; great-grandchildren: Alora, Shayna and Jacob Cain; sister-in-law: Shirley Schwartz; nieces and nephews: Alice Irene Rosenberg, Michael Katz and his wife Wendy, Leslie Schwartz and his wife Beth, Bart Schwartz and David Schwartz.

The family of Ben Slotnick created this Life Tributes page to make it easy to share your memories.