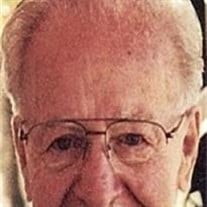 Born Sep 30, 1919, Bernie passed peacefully in the night on December 25th. He was a native of Kansas City and resided in Saucon Valley Manor, Hellertown, PA with the care of his son and daughter-in law since 2007. He is survived by Lillian Robbins, beloved wife of 69 years, of Village Shalom, Overland Park, four daughters, Doreen Sandage of Prairie Village, Micki Hoffman of Manchester, MO, Shelley Douglas of Prairie Village, Leslie Robbins-Cureau of Schenectady, NY, and son, Bob Robbins of Bethlehem, PA. He is also survived by a sister Laurel Daitch of Coconut Creek, Fl, and a brother Dave Robbins of Brooklyn, NY. He also leaves five grandchildren and three great grandchildren. He worked for TWA for 40 years beginning prior to WWII as an engine mechanic before retiring as a lead mechanic from the Kansas City overhaul base in 1985, and also worked part time for many years at Circle Auto Parts of Kansas City. Bernie served in the US Air Force continuing as an engine mechanic and was discharged in 1952, returning to TWA. Bernie was also an active volunteer at the Kansas City VA Hospital dedicating over 1500 hours in six years, believing in giving back to his fellow soldiers in need. He was also a member of the East Gate Masonic Lodge # 630. Bernie will be missed by his family and friends, and in the words of his son “he was a true example of the kind of person who did his part to help build America to be strong and safe for future generations to come - through hard work and serving his country proudly”. Dad, you’re a good man. Graveside services will be privately held for immediate family. The family will be receiving visitors at Village Shalom, 5500 W. 123rd St., Overland Park, KS on Wednesday evening from 5:00 to 8:00pm. In lieu of flowers, donations are encouraged to be made to the Kansas City Chapter of the Disabled American Veterans, 8787 Old Santa Fe Road, Kansas City, MO 64138, in memory of Bernie Robbins.

Born Sep 30, 1919, Bernie passed peacefully in the night on December 25th. He was a native of Kansas City and resided in Saucon Valley Manor, Hellertown, PA with the care of his son and daughter-in law since 2007. He is survived by Lillian Robbins,... View Obituary & Service Information

The family of Ben B. (Bernie) Robbins created this Life Tributes page to make it easy to share your memories.