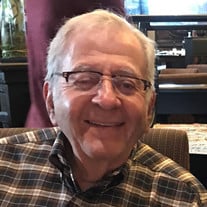 Bennie S. Corchine, age 92, passed away on August 4, 2020 at his home in Overland Park, Kansas. Bennie was born in Dallas, Texas on September 18, 1927, the only son of immigrant parents and the youngest of three children. Bennie graduated from Forest Avenue High School in Dallas, Texas in May 1945 before serving in the United States Army during World War II. Bennie was extremely proud of his military service, especially as a first generation American. After the war, following a brief college stint, Bennie worked in the family business before opening an auto parts store in Dallas which he successfully operated for several years. He met his wife of 43 years, Marlene Wachtel Corchine, on a blind date. They soon wed and eventually moved with their two sons to Kansas City, Missouri, where Bennie worked for his father-in-law, Arthur Wachtel, who was also in the automotive parts business. Bennie also had a successful career working at various automotive parts-related jobs before he and Marlene opened Mail Service, Etc. in Overland Park, Kansas. In their later years, Bennie and Marlene moved to Peoria, Arizona where they resided for several years, meeting many new friends. Bennie was a past member of Congregation Beth Shalom, Kehilath Israel Synagogue and Beth Emeth Congregation in Sun City, Arizona where he had the honor of serving as the congregation’s President. Bennie moved back to Kansas City in 2015 where he lived until his death. Bennie was a devoted father, son, brother, uncle, grandfather and great-grandfather. He was preceded in death by his parents, Isadore Corchine and Anna B. Corchine (nee Kahn), his sisters, Selma Wade and Minette Berman, his beloved wife, Marlene Corchine, and his sister-in-law, Natalie Duggan. Bennie is survived by his sons Robert Alan Corchine (Andrea Poisner-Corchine) of Albuquerque, New Mexico/Leawood, Kansas, Andrew B. Corchine of Englewood, Colorado, his grandchildren, Joshua D. Corchine (Samantha) of Gilbert, Arizona, Jacob Corchine of Englewood, Colorado, and Rachael L. Corchine of Albuquerque, New Mexico, and by his two great-grandchildren, Oliver Graham Corchine and Quinn Harper Corchine. He is also survived by numerous nieces, nephews, and cousins. After moving to The Atriums in Overland Park, Kansas, where he lived from 2015 until his death, Bennie met a very special woman, Rowena Jacobs, for whom he developed a special bond. A special thanks to Rowena’s family for all their kindness extended to Bennie. A special thanks also to the staff of The Atriums for the caring support and comfort they provided to Bennie, as well as thanks to Bennie’s many friends at The Atriums. In lieu of flowers, please make a donation to the Jewish Federation of Greater Kansas City or to the charity of your choosing. Private family services will be held. Interment at Rose Hill Cemetery.

Bennie S. Corchine, age 92, passed away on August 4, 2020 at his home in Overland Park, Kansas. Bennie was born in Dallas, Texas on September 18, 1927, the only son of immigrant parents and the youngest of three children. Bennie graduated... View Obituary & Service Information

The family of Bennie S. Corchine created this Life Tributes page to make it easy to share your memories.