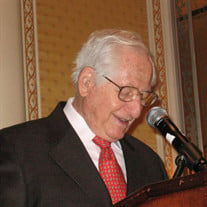 Bernard Louis Balkin of Kansas City, Missouri, passed away on January 23, 2021 at the age of 95. Bernie is survived by his wife of 72 years, Bettye Sue, his daughter Jan Ellen of Falls Church, VA, his son Jack Mason, of Branford, Connecticut, and daughter-in-law Margret Wolfe, also of Branford. Bernie will be missed for his turkey calls on Thanksgiving, his hatred of peanut butter (having worked in a peanut butter factory as a youth), his love of seafood (and lack of understanding why his daughter could not tolerate it), the stories of his summers spent with his many cousins, and his love of the law. He served two years in the Navy and Naval Reserve as an Ensign stationed in the San Francisco area, traveling to China on one occasion. While still in the Reserves, Bernie graduated from the University of California at Berkeley in 1947, with a degree in engineering. He then applied to and was accepted at Harvard Law School, where he received his Juris Doctor degree in 1950. Upon returning to Kansas City, he joined a local law firm before establishing Achtenberg, Sandler and Balkin, with the late Irving Achtenberg, and the late Sheldon P. Sandler (Bettye Sue’s brother). The firm was known for many years as Sandler Balkin Hellman & Weinstein before Bernie joined Gilliland & Hayes in the 1990s. With an international base of clients in the areas of construction, fidelity and surety law, Bernie traveled widely and was the go-to attorney in his field, authoring many papers and treatises. He was most proud of co-founding the Surety Claims Institute, of which he served as president from 1991-1998. He remained an active participant in American Bar Association activities, especially as vice-chair of the ABA’s Fidelity and Surety Law Committee, and from which he received the ABA Fidelity and Surety Law Committee’s Lifetime Achievement Award in 2009. A loving father, a devoted husband, and a joy to be around when teaching his daughter baseball and telling old jokes to his son, Dad will be missed. In lieu of flowers, contributions may be made in Bernie's name to Congregation Ohev Sholom, 5311 W 75th St, Prairie Village, KS 66208.

Bernard Louis Balkin of Kansas City, Missouri, passed away on January 23, 2021 at the age of 95. Bernie is survived by his wife of 72 years, Bettye Sue, his daughter Jan Ellen of Falls Church, VA, his son Jack Mason, of Branford, Connecticut,... View Obituary & Service Information

The family of Bernard Louis Balkin created this Life Tributes page to make it easy to share your memories.

Bernard Louis Balkin of Kansas City, Missouri, passed away on...