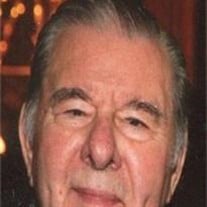 Bernard Lutzk, 86, of Overland Park, beloved husband, father and grandpa died Friday, March 9, 2012 at the Sweet Life Hospice care. Funeral services will be at 1:00pm Sunday, March 11, at The Louis Memorial Chapel, 6830 Troost Avenue, Kansas City, MO with burial to follow at Mt. Carmel Cemetery. In lieu of flowers, the family suggests contributions to the Hyman Brand Hebrew Academy, Beth Shalom Synagogue or Beth Israel Abraham and Voliner Synagogue. Bernard was born October 17, 1925 in Brooklyn, New York, the son of Anna and Abraham Lutzk. His family fondly called him “Bernie”. Bernie is survived by wife of 61 years, Eleanor, daughters and son-in-laws Alison and Dr. Norman Heisler, Cheryl and Barry Kantor, son and daughter-in-law Howard and Dion Lutzk, and eight grandchildren, Aaron Lutzk, Alex Heisler, Brittany Lutzk, Josh Kantor, Zachary Heisler, Asher Kantor, Ilana Heisler and Shane Lutzk. Bernie was a handsome guy, with those cute dimples that shined from his cheeks when he warmly smiled at you. He is fondly known for his fun sense of humor, as he has always been quite the kibitzer with family and friends. At 18 years of age, he was drafted into the United States Army and served in the infantry unit. He worked the artillery gun and became a corporal. He travelled all over Europe and had many unique experiences during his years of service. Bernie earned his degree in Optometry at the the Illinois Institute of Technology (IIT), the Chicago School of Optometry, and moved to Kansas City in 1951 to pursue his career and start his family with Eleanor. Bernie was 1 of just 3 optometrists serving the downtown Kansas City community in the 1950’s, and he practiced for over 30 years. As an optometrist, Bernie was loved and respected as he could always connect on a personal level with his patients, and took great pride in serving as their optometrist. Bernie was a long time member of Congregation Beth Shalom and the Jewish Community Center of Greater Kansas City.

The family of Bernard Lutzk created this Life Tributes page to make it easy to share your memories.