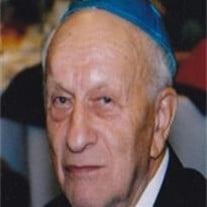 Bernard Tenenbaum, 90, of Overland Park, KS, passed away Sunday, August 8, 2010 at Menorah Medical Center. Services at 10:30am Tuesday, August 10, in the chapel at Kehilath Israel Blue Ridge Cemetery. Burial to follow. The family suggests contributions to Kehilath Israel Synagogue’s Kiddush Fund. Mr. Tenenbaum, who was known to most people as “Benny”, worked for Mittelman’s Furniture Co. for approximately 30 years before his retirement. He was a member of Kehilath Israel Synagogue and its Men’s Club. He was a former member of Beth Israel Abraham & Voliner Synagogue. Mr. Tenenbaum was born in Warsaw, Poland, was liberated from the Holocaust, worked in Frankfort, Germany for the U.S. Army for 2 years and came to the United States via New Orleans in 1947, then directly to Kansas City. He loved his synagogue and had a special role teaching people how to say Kaddish (prayer for the newly deceased) and he would say Kaddish for those who were unable to attend services. He attended synagogue 365 days a year, morning and evening, so there was always a quorum of 10 men, a minyan, so people could say Kaddish. Mr. Tenenbaum loved his grandchildren – everyone, children and adults, called him Zaydie “Grandpa”. He also had a great sense of humor and always had a smile on his face. He was preceded in death by his parents, Lippa and Sara Greenberg Tenenbaum; his wife of over 40 years, Rita Tenenbaum, who died in 1996; his brother, Yosele and 3 sisters, Pola, Chippa and Nacha, all of whom perished in the Holocaust and another sister, Feiga Getzel, who died in 1967. Mr. Tenenbaum is survived by his daughter and son-in-law: Debbie and Joseph Adamous, Overland Park, KS; grandson, Josh Adamous and granddaughter, Rochelle Adamous.

The family of Bernard Tenenbaum created this Life Tributes page to make it easy to share your memories.