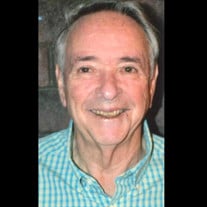 Bernard H. Ullman, 82, of Overland Park, KS, passed away Tuesday, January 4, 2022 at Kansas City Hospice House surrounded by his loving family. Funeral services and burial were at 1:00 pm Thursday, January 6, at Mt. Carmel Cemetery. Bernie was born on February 20, 1939, in Ottumwa, Iowa, the son of Bessie (Barmash) and Charles Ullman. Bernie was a loving and devoted husband, father, grandfather, brother, uncle, cousin, friend and pseudo family member to many. He had a wonderful sense of humor, very compassionate and selfless. He was one of the nicest guys you will ever meet. A true mensch who always brought a smile to your face no matter the circumstances. He was a gentle man who was a gentleman to all he knew. As an entrepreneur, Bernie followed his passion by being an owner operator of a scrap recycling operation where he enjoyed having the opportunity to work with his son Chad until he retired. He was a proud and active member of Congregation Beth Shalom since 1965. In addition, he was an active member of ROMEO. A proud veteran, Bernie was a member of the United States Army Reserves from 1962 to 1968. Bernie was married to the love of his life, Ella (Gottlieb) Ullman, for 58 years. Bernie was preceded in death by his parents, Bessie and Charles Ullman and his sister, Joyce Hodes. Bernie is survived by his wife, Ella Ullman; his sons and daughters-in-law, Susan and Lee Ullman of Leawood, and Julie and Chad Ullman of Scottsdale, AZ; his brother and sister-in-law, Paula and Stan Ullman of Denver, CO; his brother-in-law, Herb Hodes of Silver Spring, MD; and his grandchildren, Allison Ullman, Gabby Ullman, Chloe Ullman, and Jack Ullman, as well as many nieces, nephews, great nieces, great nephews, and cousins. The time spent with his family is what mattered most to him. Bernie will be greatly missed by everyone who had the honor of knowing him. The family would like to thank his doctors, nurses, medical providers and technicians, his home health nurse Jennifer Spiegel, Rabbi Glickman, Hazzan Tahl Ben-Yehuda and friends for giving Bernie an additional 19 months after his diagnosis of stage 4 pancreatic cancer. We want to thank all involved with the clinical trial at KU in which he was fortunate enough to be a participant. We truly hope this is the miracle breakthrough drug that will extend and save many lives. In lieu of flowers, the family suggests contributions to Pancreatic Cancer Network, 1500 Rosecrans Ave., Suite 200, Manhattan Beach, CA 90266 by phone 877-272-6226 or visit www.pancan.org; Congregation Beth Shalom or a charity of your choice.

The family of Bernard H. Ullman created this Life Tributes page to make it easy to share your memories.