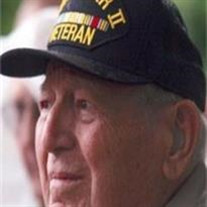 Bernard Louis Charles (Bud) Krasne passed away Thursday, July 1, 2010 at his home in Overland Park, KS. Funeral services will be 2:00 pm Sunday, July 4 at The Louis Memorial Chapel, 6830 Troost Ave. Burial at Kehilath Israel Blue Ridge Cemetery. Kindly omit flowers, the family suggests contributions to the Krasne/Maizlish Scholarship Fund @ The National Council of Jewish Women, Kansas City Section or Kansas City Hospice and Palliative Care. Bernard Louis Charles (Bud) Krasne was born in Council Bluffs, Iowa, on March 30, 1920 as the third son of Harry and Blanche Krasne. After spending his pre-teen years in Council Bluffs, he and his family moved to Audubon, Iowa, where his father operated a chain of retail stores. While in high school, he was active in the Audubon Chapter of DeMolay, where he rose to the position of Master Counselor, and then was selected to be Master Counselor of the Southwest Iowa Region of DeMolay. He was also awarded the coveted Chevalier Degree. He graduated from Audubon High School in 1937. Following graduation from high school, Mr. Krasne joined his father and brothers in the retail business. In March 1942, he became a Master Mason of the local Masonic Lodge. Promptly thereafter, he was assigned to the United States Army Air Corps, and was shipped off to Jefferson Barracks near St. Louis. In November 1942, he set sail with 52S, a small detachment of weathermen, to North Africa. After landing in Casablanca, he moved to Tunisia. After the defeat of the Axis in Africa, Mr. Krasne’s unit, 52-S, became MU-2, and prepared to invade Sicily. After driving the Axis out of Sicily, they prepared for the invasion of Italy at Salerno, and drove north to near Sienna. At that point, his unit was pulled back to prepare for the invasion of Southern France. He participated in the invasion of France, which took place at San Tropez. His unit drove north, and was just south of the Ardennes, and was pulled back just after the commencement of the Battle of the Bulge. Following the defeat of the Germans in that battle, Mr. Krasne’s unit followed the Army into Germany. At the end of the war, Mr. Krasne was summoned to Paris, for an exhibition for six weeks under the Eiffel Tower. He returned to the United States, via Boston, and was discharged from the military in September 1945. Upon his return, Mr. Krasne rejoined his family in the retail business. He also became active in the Masons, where he rose to the position of Worshipful Master. He served as President of the Audubon Golf and Country Club. He was also active in introducing Boy Scouts and Cub Scouts to Audubon County. In February 1950, he married the former Millie Maizlish of Kansas City, to whom he had previously been introduced by a mutual cousin. They settled in Audubon, where they raised two children. In 1964, he joined the Shale Goodman Agency in Kansas City, where he became a field representative of the Guardian Life Insurance Company of New York. His family moved to Kansas City shortly thereafter. He earned his Chartered Life Underwriter degree from the American College of Life Underwriters in 1968. He ultimately became the head of the Kansas City Area Chapter of Chartered Life Underwriters. He also founded Financial Diversified Services, a pension and estate planning business. In 1970, he began teaching at Rockhurst College, where his offerings included economics and estate planning. During the same period, Mr. Krasne became active in Boy Scout Troop 61, where he served as the institutional representative. He also chaired the Jewish Committee on Scouting for the Kansas City Area Council. He was selected to receive the Silver Beaver Award, the highest award given by the Area Council to an adult who works diligently for Scouting. Mr. Krasne also served for six years as a Court Appointed Special Advocate (CASA) for neglected and/or abused children in the Kansas City area. In 1996, at the age of 76, Mr. Krasne was a bar mitzvah at Temple B’nai Jehudah. For nearly two decades, he served as head of the Nathan Family Club, an organization dedicated to the memory of Nathan Katz of Kansas City. Mr. Krasne’s wife, Millie, died in 2003, after 53 years of marriage. He is survived by his daughter, Barbara, and her partner, Inez Flores, of New York City; his son, Bob and his daughter-in-law, Hale, both of Lancaster, PA, and Washington, D.C.; two grandchildren, Will, of Winter Park, Florida and Meg, of Philadelphia, PA; his brother Lloyd and sister-in-law Edythe, of Council Bluffs, Iowa; his sister-in-law, Phyllis Maizlish, of Scottsdale, AZ and Park City, Utah; and numerous nieces and nephews.

The family of Bernard "Bud" Krasne created this Life Tributes page to make it easy to share your memories.