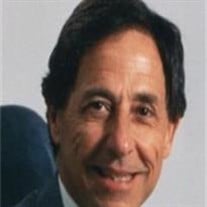 Bernard Harley Brown, loving husband, father, grandfather, and an enthusiastic mentor to many in Kansas City's business, medical, and Jewish communities, passed away in his sleep at Kansas City Hospice House in Kansas City, Mo., on May 7, 2011. Born on April 1, 1927, in Kansas City, Mo., Bernard was raised in Kansas City and remained here all his life. He acquired the nickname "Boosey" as a little boy when his family came home one day to find him in the middle of the street with an open bottle of beer. The youngest of three brothers, Bernard was a 1944 graduate of Kemper Military School in Boonville, Mo., where he finished second in a class of 149. He matriculated at the University of Michigan before enlisting in the Navy in early 1945 and shipping off to the Pacific during the last months of World War II. He served on the S.S. Tyson Lykes. Despite surviving a typhoon while in the service, he retained his love of the water and sailing for the rest of his life, and the great storm became the subject of many hours of storytelling to his children and grandchildren. After being stationed in Shanghai at the war's end, he returned home and completed his undergraduate degree in business administration at Michigan, graduating with the class of 1949. He married Barbara Rhea Seigel of Saint Louis on March 23, 1952, and they were blessed with 59 years of married life together in Kansas City, where they raised two daughters and a son. With his Michigan degree in hand, Bernard joined his father and brothers in business at Sam Brown Auto Parts Co., an auto parts distributor. Later, he became president of Sam Brown Company, which was active in related industrial businesses until the late 1980's. He also served for many years as a director of Boatmen's Bank & Trust Co. and Bank of Blue Valley. Outside of his family, his lifelong friendships, and his business, Bernard's greatest devotion was to Menorah Medical Center. He believed that Kansas City's Jewish community should provide a top-quality health care facility to serve the public. "The noblest motive is the public good" was a favorite quote of his from Vergil. His service to Menorah began in 1972, when he joined its board. Bernard guided the hospital's "Rededication to Excellence" campaign to rebuild its Rockhill Road campus and led Menorah for seven years as chairman. In 1990, the hospital honored him with its Arthur Mag Distinguished Leadership Award. In later years, Bernard led Menorah's move to Johnson County and to its current location at 119th and Nall as chairman of Menorah Park. He personally purchased the land in 1989, without telling the board. "Then I went to the board and told them of my dream to build out here," Bernard recalled during an interview for an oral history project for the hospital. When the new hospital was built under his watch, it came in under budget and on time. He eventually became chairman of the board of the Menorah Medical Center Foundation and then co-chair emeritus. In the end, Menorah ran out of ways for him to serve. "If the patients needed something, there was Bernard. If the doctors needed something, there was Bernard. If the nurses needed something, there was Bernard. He has always been there for Menorah," his good friend and Menorah colleague Dr. Walter Harvey Jacobs told The Kansas City Jewish Chronicle in 2002. In 2003, Congregation Beth Israel Abraham Voliner in Overland Park, honored him with its Mordechai Award, which is presented to someone who epitomizes the devotion to the community shown by Mordechai in the Scroll of Esther, which says that Mordechai " . . . sought the good of his people and was concerned with the welfare of all his posterity." Bernard was the youngest son of Samuel Brown and the former Sarah Mnookin, who died when he was thirteen. Bernard was predeceased by his brothers, Paul Brown and Martin Brown, and his daughter, Dr. Sherri Lynn Brown, of blessed memory. Survivors include his wife, Barbara, of Leawood; daughter, Kim Brown Fader, of Yonkers, NY; son, Bruce D. Brown, of Washington, D.C.; son-in-law, David Braun, daughter-in-law, Amy Rifkind; sisters-in-la Helen Brown and Dale Mnookin; brother-in-law, Robert Mnookin; plus eight nieces, and six grandchildren. In lieu of flowers, the family suggests contributions to the Dr. Sherri Lynn Brown Fund at the Menorah Legacy Foundation. The family wishes to express its thanks to the staff at Menorah Medical Center; caretakers Anita Bell and Viola Mays; nurse Tracy at Kansas City Hospice House; and Dr. John Goldberg, who helped him through many crises. Services will be held at 11 a.m., Monday, May 9th, at the Louis Memorial Chapel, 6830 Troost Avenue, Kansas City, MO 64131.

Bernard Harley Brown, loving husband, father, grandfather, and an enthusiastic mentor to many in Kansas City's business, medical, and Jewish communities, passed away in his sleep at Kansas City Hospice House in Kansas City, Mo., on May 7, 2011.... View Obituary & Service Information

The family of Bernard Harley Brown created this Life Tributes page to make it easy to share your memories.