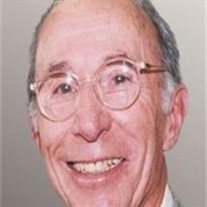 Bernard M. “Bud” Brown, 89, passed away March 21, 2013, at Kansas City Hospice House. Funeral services will take place on Sunday, March 24, 10:30am at The Louis Memorial Chapel, 6830 Troost, Kansas City, with burial at Rose Hill. In lieu of flowers, the family suggests contributions to the New Reform Temple, the Greater Kansas City Section of the National Council of Jewish Women, or Kansas City Hospice and Palliative Care. Bud was born in Kansas City, Missouri, on September 21, 1923, to Harry and Katie Brown. He attended the J.C. Nichols Elementary School, Southwest High School, and the University of Michigan, graduating in 1944 with a degree in engineering. After serving in the United States Navy, stationed in Washington, D.C., he returned to Kansas City to join his father in the truck trailer manufacturing business. Shortly thereafter, he married Phyllis “Jean” Levy, whom he met at Michigan, and that marriage lasted 67 years and produced three children, five grandchildren and two great-grandchildren. In 1949, Bud and his father opened Harry Brown Motors, a DeSoto-Plymouth dealership located on Minnesota Avenue in Kansas City, Kansas. That business became Bud Brown Chrysler-Plymouth in 1967 when it moved to Overland Park. Bud’s son Phil joined the organization in 1970, representing the third generation in the family business, although Bud remained active as Chairman until and even after his retirement. The business continues to carry his name today as Bud Brown Volkswagen in Olathe. Bud was active in the Overland Park business community for many years, serving as a long-time director at Metcalf State Bank, President of the Overland Park Chamber of Commerce, and member of the Rotary Club of Overland Park. He was also a director of the Motor Car Dealers Association of Kansas City, Chairman of the Kansas City Auto Show, and Charter Trustee of the Health and Welfare Trust of the Kansas City Motor Car Dealers. He endowed a scholarship at Johnson County Community College and served as one of the original directors of the JCCC Foundation. He was also a member of the New Reform Temple and Oakwood Country Club. Bud was a true gentleman and a wonderful, caring husband, father, grandfather, brother and friend to many. He leaves his wife, Phyllis “Jean” Brown, children Phillip Brown(Janelle), Carol Brown, Bette Grossman(Robert), grandchildren Marisha Brown-Smith(Bill Smith), Brian Grossman, Abbey Grossman(Rudy Rosen), Carrie Grossman, and Katie Braun, and great-grandchildren Cole Smith and Caelan Smith. He also leaves his sister, Thelma Byers and her family. The family wishes to thank the dedicated professionals who helped with Bud’s care over the past year.

The family of Bernard M. "Bud" Brown created this Life Tributes page to make it easy to share your memories.