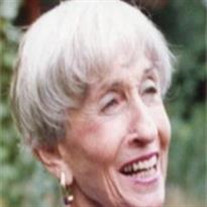 Bernice B. Brook, 91, Overland Park, KS, passed away Friday, December 16, 2011 at Village Shalom. Funeral services will be at Congregation Beth Torah, 6100 W. 127th St., Overland Park, KS 66209, 3:00pm Monday December 19. Burial Mt. Moriah Cemetery. Kindly omit flowers. The family suggests contributions to Congregation Beth Torah or the Alzheimer’s Association Heart of America Chapter, 3846 W. 75th St., Prairie Village, KS 66208. Bernice was born in Champaign, IL, and attended the University of Illinois where she met her future husband Robert. She moved to the Chicago area while Robert served in the US Army. After the war she was joined by him in Chicago, where they raised their family. A few years after the death of her husband, Bernice moved to Kansas City in 1996 to be closer to family. She was an avid golfer for over 50 years and was Ladies Champion at two prominent courses in the Chicago area. She loved to play bridge and enjoyed water aerobics at the Jewish Community Center. She made a large group of friends of varying ages during many of her activities, many of whom will remember her as “Killer Bea.” She was a great cook and known for her nut bread. Bernice was an active member of Congregation Beth Torah. She was preceded in death by her husband of 51 years, Robert; son: Bruce Brook; daughter-in-law: Judy J. Brook and sister: Thelma Cohen. Bernice is survived by her sons and their wives: Charles Brook, MD and Debra, Overland Park, KS, David Brook, MD and Barbara, Kenmore, WA; daughter-in-law: Laurel Brook, Northfield, MN; grandchildren and their spouses: Braden Brook, Dana and Jeffrey Bowser, Carly Brook, Abby Brook, Schuyler Brook, Dana Leib; great-granddaughter: Eily J. Bowser; nephew and his wife: Murray and Esta Cohen; niece: Candace Cohen.

The family of Bernice "Bea" Brook created this Life Tributes page to make it easy to share your memories.