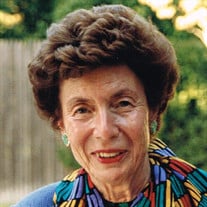 Beth K. Smith died peacefully at her home April 19, 2017, after 96 full and gracious years. She was preceded in death by her husband of 50 years, Edward A. Smith, and her sister, Ethelyn Simon. She is survived by her four children: Sarah Malino of Greensboro, NC; Judith Smith (Lawrence Blum) of Cambridge, MA; Deborah Smith (Mark Myron) of Kansas City; James Smith (Katherine Brady) of Berkeley, CA; her sister Ruth Belzer, of Evanston, IL; and her brother and sister in law, Mike and Carol Kulakofsky of Houston, TX. She leaves 10 grandchildren and 8 great grandchildren. Beth was born and raised in Omaha, Nebraska, where her parents, Sarah and J. Harry Kulakofsky were leaders in the civic and Jewish communities. After Sarah died when Beth was a very young child, Harry married Sadie Stark. Harry and Sadie were deeply committed to building strong local and national Jewish communities. Her parents were her role models for a life of service. A 1943 graduate of Wellesley College with a degree in economics, Beth turned down an editorial assistant job at Time Magazine to work as an engineering technician in an airplane factory near New York City as part of the country’s commitment to World War II. There Beth dated a young naval officer whom she had met earlier at a Harvard football game. She married Edward Smith in January of 1945. Following a few years of legal practice in New York City, they moved to Kansas City in 1948. In 1952, Ed started his own law firm, which became Smith, Gill, Fisher and Butts, later merging with Bryan Cave. Beth participated in the activities of her four children, joining with friends to start a cooperative preschool where parents volunteered alongside the teachers. She was a PTO volunteer, led numerous Girl Scout outings and started a freelance “club scout” group for her young son and his grade school friends. As a couple, Beth and Ed had a wide circle of loving friends in Kansas City and around the country who shared their love of great books, classical music, tennis, fishing and good conversation. They often vacationed in Aspen, Colorado, where they attended many seminars at the Aspen Institute for Humanistic Studies and countless concerts. Beth and Ed thrived on collaborating with their friends and other community activists to develop and lead organizations to improve the quality of life in Kansas City and across the country. Beth was a pioneer among women in working for racial equality and civil rights. In the mid 1950’s, Beth joined a group of interfaith and interracial speakers, called the Panel of American Women. These women began an early dialogue before church and civic groups, sharing both their differing and common views. Shortly after the race riots in Kansas City in 1968, Beth was asked to chair the Mayor’s Commission on Human Relations and later she served on the City Plan commission of Kansas City, Missouri. Those experiences motivated her to improve her professional skills for her work with community and nonprofit groups. She returned to graduate school in public administration at the University of Missouri –Kansas City, receiving her MPA in 1976. With her friend and colleague Marjorie Powell Allen, Beth founded the Women’s Employment Network, the Wildwood Outdoor Education Center and the Central Exchange. She was also instrumental in the founding of the Women’s Foundation of Greater Kansas City and the Midwest Center for NonProfit Leadership. Beth was an adjunct professor of nonprofit leadership in the Bloch School of Management at UMKC for many years. In her board workshops, she mentored many nonprofit executives. Beth also established the Edward Smith internships to encourage Bloch School students to work in nonprofit agencies in Kansas City. Beth was also an active member of her Jewish community. Because she was not taught to read Hebrew, she initiated the Tefilah 2000 program to include more contemporary English readings and music in the liturgy at her Congregation Beth Shalom. Beth served on the boards of the Jewish Federation and the Jewish Community Relations Board. She and Ed helped start the Jewish Community Foundation to encourage charitable giving. She helped initiate the Judaic Studies program at the University of Missouri –Kansas City and together the Smiths endowed a chair in Jewish Studies at Wellesley College. Beth served on numerous national and local nonprofit boards including Common Cause, the Kansas City Chamber of Commerce, United Way of Greater Kansas City, the Truman Library Institute and Museum, the American Jazz Museum, the Greater Kansas City Community Foundation, the Center for Practical Bioethics, the Neighborhood Alliance and advisory boards of two local banks. Beth received many civic and national awards including the first American Jewish Committee Human Relations Award, the Yates Medallion for community service from William Jewell College, the Eddie Jacobson Distinguished Community Service Award and Kansas Citian of the Year in 2008. Beth and Ed were attentive and interested grandparents to each of their 10 grandchildren, taking the older ones on travel adventures and the younger ones to local ones. In more recent years, her entire family, now 32 strong, gathered in Kansas City to celebrate her birthday and her life well lived. Beth’s life was enriched with the loving care of her extraordinary caregivers: Beverly Johnson, Hortense Borque, Myrna Bode, Donna Marie Fields, Connie Fahey and Jan Buckner. A funeral service will be held at 2:00pm Sunday, April 23 at Congregation Beth Torah, located at 6100 West 127th Street in Overland Park, Kansas. Burial will be at Mount Carmel Cemetery in Raytown. In lieu of flowers, the family requests donations to The Women’s Employment Network, Legal Aid of Western Missouri, Ad Hoc Citizens Against Crime, and the Jewish Family Services Food Pantry.

Beth K. Smith died peacefully at her home April 19, 2017, after 96 full and gracious years. She was preceded in death by her husband of 50 years, Edward A. Smith, and her sister, Ethelyn Simon. She is survived by her four children: Sarah... View Obituary & Service Information

The family of BETH K. SMITH created this Life Tributes page to make it easy to share your memories.